Early this year, border agents ran a name-check and wound up briefly detaining Mark Gonzalez as he traveled home to Corpus Christi after a vacation in Mexico. That’s why Gonzalez says he gave the Texas cop that stopped him a couple of weeks later this disclaimer: “When you run my name, I’m probably going to be listed as a gang member. I’m also the DA of Nueces County. Do whatever you want with that information.”

When Gonzalez ran for DA last year, he personified the label “nontraditional candidate” — a defense lawyer with the words “not guilty” tattooed across his chest, someone whose connection to the Calaveras Motorcycle Club even landed him in a police database of known gang members. He vowed to become a lawyer at 19, after he pleaded guilty to drunk driving. The guy next to him in court, who could afford a private lawyer, got the same charge dismissed.

Gonzalez’s office no longer takes misdemeanor marijuana cases (a $250 fine and a drug class gets charges dismissed) and even worked with a local women’s shelter on a pretrial diversion program for people accused of domestic violence for the first time. He spoke with the Observer about his new approach to criminal justice in Corpus Christi. 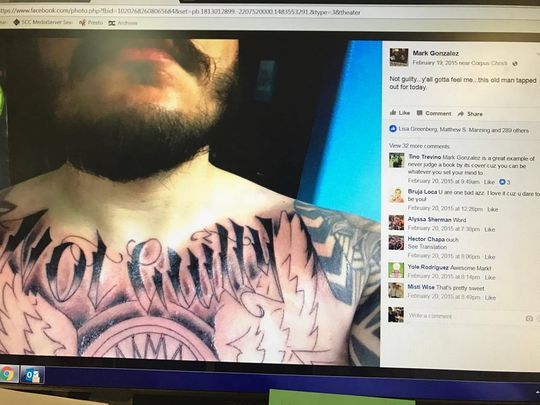 Q: During your campaign, you talked about needing to restore trust and fairness in law enforcement. What did you mean?

It’s why one of our main objectives now is transparency. We don’t want anybody to say that prosecutors were hiding the ball or didn’t disclose something. We’re open with defense attorneys about what we find, whether it’s good, bad or ugly for us. That’s also how we try to deal with media. As much as we can be, we’re open about what evidence we have, and we only go forward on a case if we can prove it. If there’s a case there, we’ll build it. But we’re not hunting for convictions. It’s about securing justice.

You’ve only been on the other side of law enforcement as a defense attorney. Any trouble getting police to trust and work with you?

As far as the higher-ups, I haven’t had any struggle with them. But I can tell you that the patrolmen, they’re the ones that may have the strongest criticisms of me and the hardest feelings against me just because I’m this defense attorney and a biker.

For the most part, our work here at the DA’s office speaks for itself. And some of those who didn’t trust me at the beginning, I think they’re starting to come around. I get approached all the time by patrolmen telling me, “We were wrong about you.” We’re gaining their trust and confidence, and eventually the work will speak for itself. That’s all that I ask.

What does a reform-minded criminal justice system look like?

I think that every DA has their own ideals and values and idea of what that looks like. For us, it’s about fairness and transparency. But I think in a lot of other ways, these reforms are just about being smart and having common sense. People who have proven they’re dangerous need to stay in jail. But low-level misdemeanors? They don’t need to be there. We need to find another way to deal with those people and that behavior. On one hand, we need to look at the jail’s repeat visitors and see if there’s anything we can do to stop that cycle. But we also need to focus our resources on people who are actually out there criminalizing people over and over again and put them away.

You have a criminal record. You’re the first from your family to go to college. What’s the impact of having someone from your background in power in the criminal justice system?

I hope it brings some humanity back to the office. Realize, we’re not here to destroy people’s lives. We’re here for justice, and sometimes that’s not always going to require a conviction. Just because we can give somebody a conviction doesn’t mean we always should and need to. That’s why we need people who can take a step back and consider their own life experiences and other perspectives. That defendant standing there was me once. So when I look at a case, I’m also thinking, is there a way we can make this person better, some chance we can give them? Don’t get me wrong, some people are going to get an opportunity and mess it up and eventually run out of chances. But we can’t lose sight that there are people and situations where we can help. 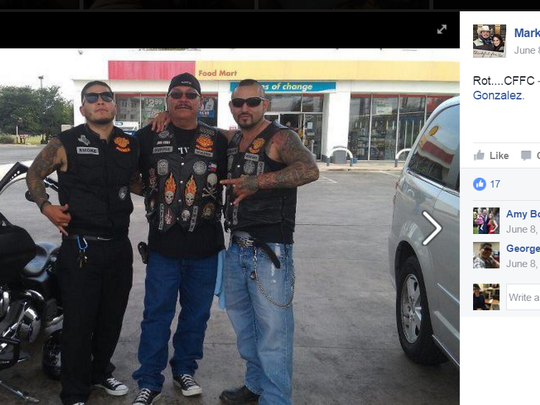 What role do prosecutors play in either fixing or exacerbating the system of mass incarceration?

The DA is probably the most important position in every county courthouse across the state. If you have a good prosecutor or a smart prosecutor with common sense, they can influence more widespread change than a judge or anyone else. We decide what cases to take and how to prosecute them. It starts and ends here.

If you have a prosecutor who’s fair and honest and open to diversion, your race, gender and economic circumstances should not play a role in the outcome of your case. Period. It’s the prosecutor who gets to decide whether to treat those cases the same. It shouldn’t matter if you have a high-powered lawyer who’s friends with someone at the DA’s office versus the new guy who just got out of law school who might not have those same relationships at the courthouse. As a prosecutor, you must treat them the same.

For the longest time, there’s been a domestic violence problem in our community. The shelter’s been open for 34 years, and I don’t see them ever closing. Something obviously isn’t working.

Someone would have a misdemeanor case, and then it would happen again and again. There was no intervention after that first incident, just punishment. Now, working with the shelter, we’re making contact with people in these abusive partnerships after that first time to give them the education they need. If defendants sign a confession and attend a six-month family violence class, that charge can be dismissed. And this isn’t something I take credit for — it was the women’s shelter counselors who helped us with this. The goal is to make sure the abuse stops, but also so that it doesn’t escalate into a felony.

What’s your stance on the death penalty?

I am not anti-death penalty, but I wouldn’t call myself an advocate for it. My two first assistant DAs, one is very anti-death penalty and thinks the government should never play a role in ending someone’s life. I have another assistant who thinks an eye for an eye is the way to go. And I guess I’m in the middle. Now I want to see what our community decides. I’m about to present a death penalty case very soon. When the jury makes their decision, it will help us figure out how we handle those cases in the future.

What role do reform-minded DAs play now that federal justice policy has made a 180-degree shift on things like drug charges, mandatory minimums and pot?

Much of what they’ve done hasn’t had an effect on us yet and probably won’t. Nobody governs us and nobody really tells us what to do. We have discretion in how we run this office. But you can already see we’re taking very different approaches that could become a problem in the future.

When it comes to things like mandatory minimums and how you prosecute drug crimes and what to do with marijuana, I think common sense is honestly going to win out on that in the long run. On marijuana, I think legalization is where we’re headed, because honestly it’s the smartest thing to do. We still live in Texas, so it may be hard to overcome some of that old thinking when it comes to drugs. But I think the economic gains and economic efficiency will eventually win people over if the other arguments don’t.