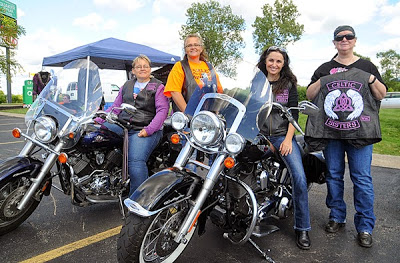 Well, Harley Davidson has gone and done it again, Not only did we old scooter tramps have to deal with their push to get more yuppies into the lifestyle, which by the way watered down who we as bikers were as a genre, but now enter The Litas. It’s a club I guess of all female members that span the globe, you can even sign up for their group on the internet, something that today seems to be normal for motorcycle clubs.

The image of the biker has changed drastically from just 20 years ago, Insane Throttle puts the change around 1994. This is when the “Yuppie Wave” as we call it here at the news magazine started to pick up steam. Any older scooter tramp can remember when it was almost impossible to get a new bike off a Harley Dealer showroom floor back then, it was also at that time, the prices of the scooters, started going through the roof. Let’s face it, nowadays a Harley is looked at as an investment, something a regular blue-collar working guy has to work 2 jobs to afford.

With that Yuppie Wave, something started to change within the biker world. It was no longer the hardcore showing up to rallies or events, we had these weekend warriors starting to show up all decked out in their pretty leathers, trying to talk the talk, and passing themselves as something they were not. Well us old time scooter tramps had to bite the bullet and deal with the new wave that was hitting us, most of us thought it would just be a fad and go away. Boy, we were wrong on that one. Not only did it not go away, it grew out of control – and now we have what we got today.

I must confess, I’m of the thinking that a woman belongs sitting on the bitch seat. For those who are old scooter tramps, nothing has caused more problems in our scene than women. Wars within the motorcycle club world have been started over them simply because they didn’t know how to shut that pie hole.

Today the old school way of thinking is a dying breed, many have claimed they know the meaning of old school, but in all reality, they have no clue. Most are now controlled by their women and have to ask permission to go take a shit, more or less express an opinion with them around in public, or god forbid your brothers.

So, what do I personally think of women in motorcycle clubs? I see it very simple. If they are in a one-piece club, fine, more power to them. On the other hand, if they choose to put on a 3 piece patch, that’s where all lines are drawn. Women cannot back up or stand for that type of patch. Sorry ladies, just being real. I always ask those men who are in clubs with women, clubs that choose to use a 3 piece patch, How do you do it? How can you always be out in public and have to worry about a club who don’t see women as having the right to wear that patch, and have to defend them?

These are some very important questions both for men and women before they put that 3 pc patch on. Now as far as The Litas, it seems from their website at least, they do not wear any type of patches. I say good for them, at least they were smart enough to recognize that their association didn’t have to go out there sporting something they couldn’t defend.

Our world is changing, many of the old timers are in the minority now. Our lifestyle has become overrun with the politically correct, the yuppie wave of their interpretation of what its suppose to be a biker, and those who see what we do as just some sort of hobby. It’s a crying shame that bikers let what we came from, end up what it is today. The good old days are long gone, with this new generation coming up in the scene, I personally don’t see it ever returning to the roots. And that,is a sad day in the history of being bikers. The following is an Article from The Daily Utah Chronicle

Motorcyclists are known for being bad, free-spirited and never playing by the rules. The history of motorcycles consists of stories mostly about men. Hell’s Angels, Outlaws, 69’rs, Black Sabbath and many more are popular motorcycle gangs that have solidified the rider stereotype. But things are changing in the biker scene; women are increasingly speeding into the rear view mirrors of cars on motorcycles, shifting the image of rugged, men-only, beards and brews to a massive network of women rocking leather, tattoos and touring all over the United States.

One biker gang that’s increasingly becoming known on Instagram is the Litas. Members are a community of women who support individuality and “bad-assery.” They represent being independent and living life on the road. Their group contains 4,000 women riders from 24 different countries. They have a website for their members and supporters, as well as sell merchandise sporting their brand. This is only one of many woman biker gangs around the world. Others include Leather and Lace, The Bikerni, The Female Bikers of Marrakesh and many more.

Motorcycle companies have taken note of the increase of women venturing onto the scene and have introduced smaller figured bikes to fit the female figure. “[Motorcycle companies] are responding with updated versions of classic bikes, like the Ducati Scrambler, Honda Rebel 300/500, BMW G310R and Harley-Davidson’s 2017 Street Rod — bikes with smaller frames but big engines that appeal to female riders, as well as other amenities,” said Kellie Ell of USA Today.

Biker gangs are assumed to be typically man-driven. This is completely true, according to Catherine Martin. “They are run very firmly by men who have usually clawed their way to the top of this primal food chain, and considering the general savagery of the ordinary member, that’s impressive.”

According to a female biker forum, if you are a single woman in an all-gender biker gang, consider yourself disrespected and open to all men. “Women must be outwardly submissive, be thick-skinned about sexist attitudes, and be able to get along reasonably well with the other women.”

Women in biker gangs enter in with male partners, and when deciding to leave the club, all ties are lost. The ocean of friends and family they once considered close is completely denigrated.

“Every woman going in knows that every part of her club affiliation is on loan to her by her Bandido [man]; PBOL patches and clothes included, and he can take it all away whenever he pleases,” said Martin.

When you’re in a multi-gendered biker gang as a woman, you are expected to be with a man who essentially “owns” you, or so it seems. This is why all-women biker gangs are so essential to our society.

Perhaps it’s due to the feminist movement of the 20th century leading to more independence for women by riding motorcycles. Either way, this movement is extremely positive for females everywhere and is shaping the biker culture into something more based on gender equality. In today’s biking world it’s about passion and love for the sport, rather than power, ownership and ego. And as time goes on hopefully this momentum will lead to mixed gender biker gangs as well.