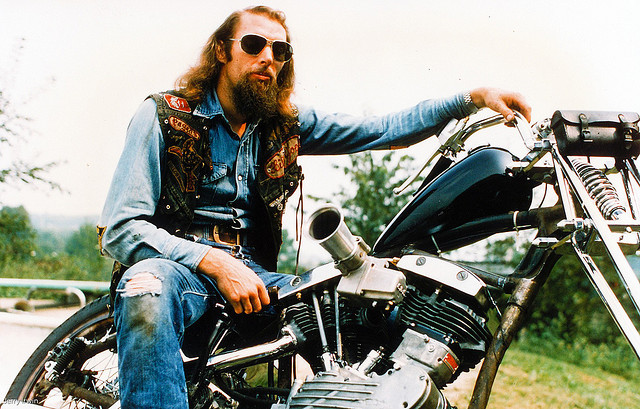 The Bikes,
Let’s step back just a bit before we go forward with today’s topic. For all you young guy’s there is a little history to remember first. 1969, why is that relevant you ask? Because that was when Harley sold out to AMF, that was also when Honda built the first “superbike” the CB 750. (BTW only a year earlier the greatest biker anthem of all time came out, Born To Be Wild) those two things, AMF and the Honda 750 changed the biker world for years to come.

We all want to pretend everyone was riding around on hardtail Harleys going to every rally and flying low across the country on these great American made pieces of iron. Well, the truth is a little different. AMF Harleys sucked dog shit.
I am convinced even today one of the biggest challenges bikers faced back in the 70s was our bikes were shit and riding 1200 miles to Sturgis could turn into a month-long adventure that cost you your job and family. Christ back then the fucking roads even sucked worse than today.

That is the truth of why there were really no big “national” rallies. They all talk like there were but the reality was very few people could travel across the country on a bike, the bike wouldn’t make it. A big rally was 1000 people over 3 days. Lol
Then along comes the Jap invasion. By 1980 you could buy a Yamaha 650, chop it, actually ride it somewhere and not have to bring a fucking parts shop with you. It was wonderful.
Kawasaki came out with the 900 Z1 in the early seventies as well so a ten year old inline 4 that was dependable, affordable and ran like a fucking scalded dog was easy to find and use to start a build with.

I remember how great electric start actually was when it first came out. Triumphs were cool as well but boy for affordable dependable bikes the Japs were kicking ass.A lot of you may not know this but Hondas first Interstate model came out in 80, like 5 years after the Gold Wing first appeared. I gotta tell you an Interstate was the shit man. Until then if you wanted a full dressed touring bike you had to buy a bike and then buy all Vetter aftermarket shit and assemble it.

The first Interstate had a radio, from the factory no less. Incredible. Remember Harley didn’t come out with the EVO motor until 1984. That saved Harley and they definitely got back in the game by the second half of the decade Harley was trying to make up for lost ground but it really took them until about 88 to get back what they had lost. AMF owned the company until 1981 and the best they were building was the piece of shit Shovels.

Remember these weren’t bikes that had new 2017 parts available to replace the junk that fell off, these were junk bikes built with junk parts with junk replacement parts.
I can honestly say that if you haven’t ever experienced a stock mid-seventies shovelhead you didn’t miss anything. I had 2 of them. I know. The imports opened up the world to all of us.

When I left for the coast again it was 1984 on a three-year-old crashed Suzuki 850 L model I paid 800 dollars for at an auction. After pressing the front forks straight and putting on a new front brake lever and shift lever I took off. Total $900.00 tax list, title parts, and labor. I rode that thing 48 thousand miles in two years put on tires, brakes and oil changes and that was all.  It was fucking heaven. I could run 85 mph all day never add oil, never adjust the chain (shaft drive) never lose the horn or crack a gas tank mount. Unfuckingbelievable.

Yea I  had guys ask me didn’t I miss the “good old days”. Nope.
On this trip, I chose the middle part of the country for my way west and the southern route on the way back. Basically staying parallel to I 80 on the way out and running back through Vegas and Flagstaff on to the Lake of the Ozarks region before heading North and East toward home.

While I was in Vegas I had to stop and look at the fountains in front of Caesars Palace. I was like 7 when Evel Knievel jumped those and man standing there looking at them in person I came to fully comprehend how insane that fucker was.
Remember back in 84 we still didn’t have cell phones or cable news 24/7. Hell Newsweek was still a magazine and USA Today was like 2 years old.

The reason I point that out is I left on this trip at the end of July. I had just read about some big biker battle in Australia a month or so earlier. I thought about how shitty it was that we were supposed to be all about riding and brotherhood and having a great time and now our “brothers in the wind” as I thought of all bikers were now being killed by each other. Christ, we had enough bullshit going on trying to stay high, away from “the man” and trying not to get run over by blue hairs on the highway.

Times were changing for sure, better bikes, better weed, better roads, better prepared. On this trip, I even had chaps and gloves.  The early eighties, we all still nodded to each other when we ran into bikers, we all stood and sang Born To Be Wild at every party because we believed it.

We respected each other.
Unfortunately, storm clouds were on the horizon.

To Submit your Biker Story : Email it to insanethrottle@hdbikernews.com

Don’t forget to go over to Insane Throttles YouTube Channel and subscribe (Once we get a 100 subscribers YouTube will let us get rid of this stupid long link). You can subscribe to our channel at
https://www.youtube.com/channel/UC5u6zJ26i4brZ8L__9jmGsw