Being in this life has given me many great experiences and allowed me to meet a bunch of great people that have made it an interesting ride. I used to ride with close friend that was always there, we hung together for years and always knew we had each others backs. He took care of shit with my family when I was not there and I helped him when his shit went sour and he was looking at a dime in Ohio.

We got thru all of it as brothers are supposed to be, not the let’s get drunk and tell each other bullshit stories I have seen a thousand times. Real brotherhood, not based on earning or some money gangster shit looking for rank bullshit.
This is a story about a ride with a friend, a brother.

One of the guy’s I met and became impressed with was a bike builder out of Florida, he was kind of a local legend the first time I met him, yeah he had already been around and was in a couple Easyriders articles and shit but boy did his fame blow up later. He went on to become famous, then it all came crashing down on him.

Billy Lane from Choppers Inc. I am not friends with Billy and am pretty sure he would be hard-pressed to remember me but I had the opportunity to watch him work back before he was famous from the biker build off series. We were out riding around Daytona half fucked up one day back in the late 90s and were working our way south, my friend, he had never been to Florida before with a bike so we trailered to the warmer weather and parked the truck and rode down the last 400 miles.

It was late February and we had taken a minute to head down to the Southland and then go back up to his only ever Bike week. My friend’s health wasn’t the greatest and I lost him a few years later but for that trip, it was a riot. It was the week before the first weekend of Bike week so it was a little busy but not bad. Of the 20 plus trips to Bike Week or Biketoberfest, it was the best trip to Florida I ever had.

We went to Froggy’s and did the main street thing. It was a lot easier at that time because we were early. Then on to the Shark. Since the Shark is gone now I can say it was always great to know who was in charge and how to get the ending you wanted with every visit. My friend had never been to a place like the Shark and was fucking amazed at how things were handled if you knew how and who to ask. He got the finish he wanted from a hot blonde and about died on the spot.

After we left the Shark we went southwest and rolled out to the Cabbage for one then continued on heading south and east. We were sitting at a stop light in Melbourne and I looked over and saw Choppers Inc. Honestly, it looked like an old laundromat with a bunch of wild writing in the front windows about shit on sale. We pulled in and there was a good-looking woman at the counter with an entire fab shop behind it. No walls no barricades just a couple of racks of shirts off to the right, like three display cases with shit Billy had patented, foot pegs or hand grips with 44 cartridges in I think, that were all for sale, 3 bikes for sale also, all OLD SCHOOL to the max. 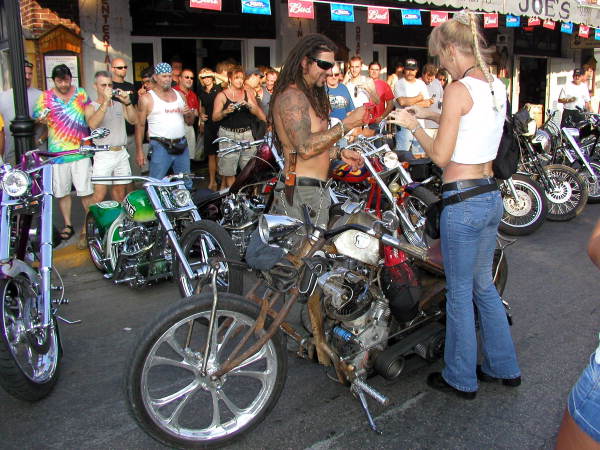 Behind the counter, there were welders and saws and racks of tubular steel a workbench and on the wall an upside down Harley bar and shield clock. This guy’s shop was the shit.
We stood there for about ten minutes and Billy walked in with another guy. He was really decent said high and acted cool as crap. No bullshit attitude.

So he says he has to work on a frame and we decided to just stand there on the other side of the counter and watch. I could write an entire story about watching him, but man that dude built a frame from scratch in like an hour and a half, he eyed up everything and I honestly never saw him measure shit.

If you ever have the opportunity to see a bike BUILDER, not a bike ASSEMBLER do their shit .man do not pass it up. That guy was fucking amazing to watch. I saw him again in 05 when biker builds off was going crazy and he was not exactly the same personality but really not far off, just a little more rushed. We were at Daytona Harley and he was mobbed, but he was still friendly enough.

Some of you may remember Billy was involved in a drunk driving crash in 06 which as a result of he was sent to prison for six years. He was sentenced in 09 released in 14. I was always impressed in the end because he accepted the responsibility for what he did. Honestly not a lot of that going around anymore, now everyone else is to blame and most dudes hide behind a list of excuses blaming their mother or old man and pretend they were always misunderstood during their childhood or whatever.

The last time I talked to Billy was in the spring of 08.My friend had died the winter before and I was just down in Florida riding around remembering shit I had done with him. I rode down to Melbourne looking for something, some memory or whatever and rode up to Billy’s shop. That was gone too.  I decided to try to find out where the shop had gone and how Billy’s court case was doing because it just seemed like something to do. I spent a couple of hours hunting around and finally found his shop in the back of a warehouse complex out towards I 95. I rode up, no one was around, no bikes, one car locked up but what the fuck I had to try.

I knocked on the building for like 2 minutes and when the door opened it was the same dude that had walked into the old shop with Billy the first time I met him. I asked about Choppers Inc. and shit, he told me they were only doing mail order and internet stuff because of all the people blowing up at Billy and the press hounding his ass. When he invited me in, it was completely different. There were a couple of biker build off bikes over against a rack, the place was packed with shirts and Choppers Inc. shoes and all kinds of stuff.

We were standing there bullshitting about how much had changed and we heard a bike roll up, in walked Billy. He kind of recognized me, I think it was more out of courtesy than reality, but he was really decent. I fucked with him about his flame-covered shoes with Choppers Inc. logo on and he laughed, then he gave me 3 long sleeve white tees with his Eight Ball/ Choppers Inc. logo on back.

I left there feeling a lot better and headed up the coast to a little seafood joint on the Intercoastal just south of New Smyrna. While I was having a shrimp bucket and a Diet Coke I thought of all the shit I had done to that point and decided it was a good time to suck it up and get back to the party.

After all, I was a legend in my own mind and someone needed me to start the party. So off to the Iron Horse to catch up on what was happening before heading up to Cheyenne Saloon for the end of the night when I needed to try finding a bed for the night.

It’s funny but I still have one of the shirts Billy gave me and for some reason, it always reminds me of my old friend when I wear it.

I think the message is this tonight my friends, remember always, it is the ride that matters not the destination.

To Submit your Biker Story , News lead, Bitch us out, or even give us a compliment on a story : Email it to insanethrottle@hdbikernews.com

Our First episode of “Motorcycle Madhouse” will be coming out Monday January 6th. You can subscribe to our channel at https://www.spreaker.com/user/insanethrottle