I think I owe Double barrel a drink lol. He was right, all the little minions came out to make the whole piece about Iron Order instead of what the piece was all about. “Will this be the new normal for when an individual commits an act, a whole club is responsible for their actions”? Is the person doing the testifying credible? Let’s take the Iron Order out of this scenario for those who are hell-bent on thinking this is all about Iron Order. You have a member of a big 5 club in the same position as the dude in this wrongful death trial. Would you think it was right for that member’s club to be responsible for the actions of just one individual?

That’s exactly what is going on right now. A club is being held responsible for 1 members actions. It’s all fine and dandy if it’s the Iron Order this time around. “Hell yea, take them fuckers out”. What we’ve been hearing last two days. Would you be saying that if it was Hells Angels, Outlaws, Pagans, Bandidos, or Mongols in the same position? Cause it might be the Iron Order this time, but it could be one of those big 5 the next, god help the motorcycle club culture if one of those clubs lost a case like this.With all that goes on in the 1%er world, cases like this could be worse than whats going on with the Mongols Patch Case. Instead of going after a clubs patch, they will just bankrupt the club out of existence. Level all kinds of judgments against them, when they can’t pay, let’s take the clubhouses, let’s take any property in their name.

I actually got the title of this post from a member of one of the big four. I just couldn’t put it out there the way it was said. “Does this fucking joke know what the hell he is doing? He is helping the fucking government prove that clubs as a whole are responsible for the action of 1 member, it’s bad enough we have to fight off these fucking feds because some ass in a patch decides to go off and shoot someone and they turn around to use that case for basis of RICO against us”.

Keyboard Commandos everywhere here this. “Actual Club members know the stakes in this kind of case, since you have no stake in the game to understand something like this, you’re opinion doesn’t matter”. You claim to support the rights of motorcycle clubs, then support them regardless of who the hell it is when it comes to a case that affects them all.

For the idiots going around saying Insane Throttle is a mouthpiece for Iron Order. Get the fuck out here with that shit. You know how many times we have to answer questions on why we promote the Iron Order Truth Corner on our front page from Iron Order Members? Well if you haven’t looked, I would advise you to do so, a nice banner on the right-hand side of the website.

Our answer to them is simple. Insane Throttle provides links on its site to many other places to get a different point of view that is different than ours. We find them credible with the stuff that they present, they have an audience of the biker community that wants to see that kind of stuff, so Insane Throttle will not stop promoting them because you’re offended by it. So we do a few stories that we see as legit, worth putting out there and now we are Iron Order supporters? Grow the hell up, that is how the world works, you have a story you print it. We’ve also bashed them on many occasions, look up those stories before you run off at the mouth.

As far as Aging Rebel. We’ve invited him to come on Motorcycle Madhouse to refute the information that was presented. Information that was gathered in his own words through his statement and interviews he had given to newspapers. Nothing made up, in his own words. He decided to first tell us to fuck off, then asked for 2k to come on. If the information we presented was wrong, why not come on and talk about it and set the record straight? If he truly loves the motorcycle community as he says he does, set the record straight. Tell us where we went wrong. There is a rallying cry for all those who think he has been mistreated. Tell him to come on the Madhouse and state his position, clear the record, tell us why we were wrong. If he can prove it, Insane Throttle will take the egg on our face and print a retraction on everything that was printed. If he cannot come on and refute it, shows a ton right there now doesn’t it?

This Thursday, Feb 1st Peter “Big Pete” James will be on “Live” with Insane Throttle. Big Pete is the former Regional Vice President of the AOA, Former President of the Northside Chapter of the Chicago Outlaws. He is also the Author of the book “The Last Chicago Boss”. He is also the Regional VP that I rode under for years with the B.P and I call Boss to this very day. Come on to Facebook Live, ask questions, get informed, get his take on clubs being held responsible for the actions of just one man, the consequences that a club could face if this became normal. Ask the man who for 17 years ran the Northern Illinois Confederation of clubs. Hope to see a lot of you Keyboard Warriors attend!

So to recap, Rebel, if you feel that any part of the story was incorrect or even misrepresented. We invite you onto the Motorcycle Madhouse to state your position on everything that was put out. Let those listening decide after hearing both of us go over the materials. By the way, we would like to thank all the haters that you sent over to the Youtube Channel. The choice is with you Rebel, the invitation again is open for you to come on. We will keep the subject within the article we published, we will not use any other material currently in our possession. We will stick with just the article and the material presented within.

What say you? There is a whole of a lot going on out there to be a pissing match over the internet between blogs. So instead of going back and forth, solve it all in one shot on the air where all can listen and make up their minds. If you choose you don’t want to appear, then don’t say we didn’t offer. But we will not continue to go back and forth like we are a bunch of school girls. What is that saying? You stay on your side of the sandbox and we will stay on ours lol.

To Submit your Biker Story , News lead, Bitch us out, or even give us a compliment on a story : Email it to Insane Throttle Biker News 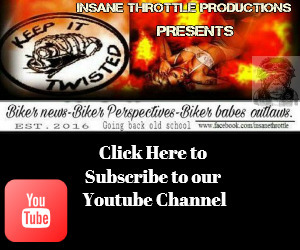