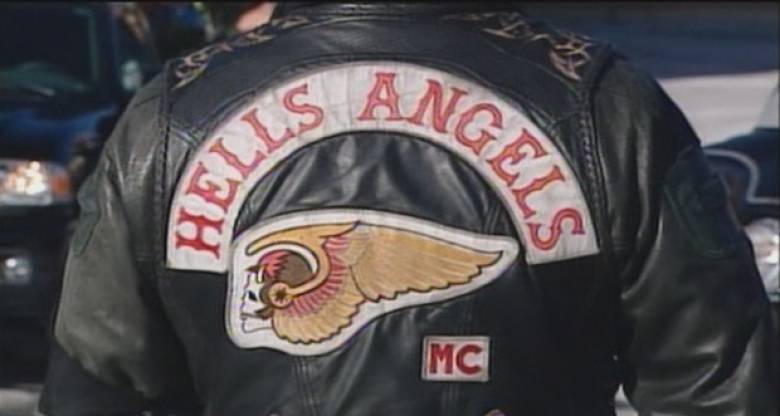 Ontario Provincial Police say they have charged a woman and two men with several offences after guns, drugs and ammunition were seized from a Oshawa home linked to the Hells Angels.

In a news release on Monday, police said they searched a home last week that belongs to a Hells Angels “hangaround” member, which is a person in the process of joining the outlaw motorcycle gang. That man is still at large but police have issued a warrant for his arrest. His name was not released.

All four people under investigation live in the home, police said.

Det.-Staff Sgt. Anthony Renton, operations manager of the OPP’s biker enforcement unit, said the material seized, along with intelligence obtained by the unit, suggests there are “rising tensions” between Hells Angels and other outlaw motorcycle groups and their support clubs in Ontario.

“A lot of what we do within the biker enforcement unit is based on intelligence. And our intelligence is clearly demonstrating to us right now there are tensions between Hells Angels and outlaw motorcycle groups,” Renton said on Monday. “There is evidence located within this search that supports that intelligence.”

Renton said the tensions have led to fighting and that violence has taken the form of assaults by one motorcycle gang member against another. Police in the province are investigating two incidents in the past four weeks, but he declined to release details of when, where and who was affected.

“Outlaw motorcycle gangs are a problem within Ontario. The Hells Angels specifically have been deemed a criminal organization. Their activities that they are conducting all relate to criminal activity. For the police, it presents a very significant problem,” Renton said.

“This landscape is ever changing. There’s a significant growth right now. It’s been going on for the past couple of years.”

The Hells Angels are “well established” in Ontario and they have a presence in major cities and many smaller communities in the province. That includes Oshawa, he added.

The OPP hopes to educate the public in the next year about the dangers of supporting outlaw motorcycle gangs and their activities, he added.

All three appeared in a Oshawa courtroom on Monday.

No photos were released of the accused or of the seized items.

B.C.’s public safety minister says he has serious concerns about a new motorcycle club of Lower Mainland firefighters called Florian’s Knights that has been attending events with the Hells Angels.

“This is just disturbing on so many levels,” Mike Farnworth said after Postmedia obtained a photo of a founding member of the Knights posing with three Hells Angels.

Farnworth said firefighters face incredible danger on the job, made worse in recent years by “a rise in fires in homes where drug labs are located.”

“And many of those labs allegedly have links to the Hells Angels. So I find it more than a bit disturbing that you’ve got a motorcycle gang composed of firefighters associating with Hells Angels who may be making their job even more dangerous than it already is.”

Farnworth said he has asked his staff to look into the issue and report back to him.

The Knights are wearing a three-piece patch on the backs of their leather vests, meaning they sought permission from the Hells Angels when they were forming, retired police biker expert Brad Stephen told Postmedia.

Stephen, who was a firefighter before his long career with the Vancouver Police Department, said it’s disturbing that some firefighters want to associate with Hells Angels.

The Knights contact person, Nick Elmes, is a Burnaby firefighter, as are two others in the new club. There are also two New Westminster firefighters and a retired Vancouver firefighter.

Burnaby Fire Chief Joe Robertson said he also has concerns about the Knights and has met with the RCMP to discuss the issue.

“The city and the fire department do not condone any association of our members with the Hells Angels. We support the good work that all the rest of our firefighters do in the community,” Robertson said Monday. “This reflects really poorly on the good work that everybody else does.”

Some of the Knights have been wearing their vests, known as “colours” on their way to work, Robertson said.

“I conveyed my displeasure because they were riding to work in their biker colours and we have a legal opinion that says that they can actually do that,” he said.

“There are concerns. I share the same concerns that the police have.”

Elmes, who said he is a founding member of the Knights, said in an interview Monday that the club formed to raise money for charity and that no one should be concerned.

He admitted the Knights have been at events with Hells Angels but said those events were open to anyone to attend.

As for the photo of him with three Hells Angels, including Kelowna president Damiano Dipopolo, Elmes said he is a childhood friend of Dipopolo.

“I can’t help that they are at the same ride we are at,” Elmes said.

Elmes said the Knights advised the Hells Angels that they were starting their new club.

“I told them what I was planning on doing. I gave the whole motorcycle community a warning on what was going on before we started flying our colours,” Elmes said, adding that he asked the HA: “Do you have any issues with us doing this?”

Another social media comment obtained by Postmedia has a member of the HA-aligned Devil’s Army biker club in Campbell River thanking the Florian’s Knights for their recent hospitality.

Elmes said if the public has any concerns about his group “it is because the media and the cops are putting absolute lies in people’s heads.”

“I don’t think there should be a concern. Everyone is just riding, doing their thing. This isn’t Sons of Anarchy, where guys wearing their vests are committing crimes and murdering people,” he said of the TV show about a fictitious biker gang in California. “This is just guys on their bikes riding at charitable events.”

Pilkington was among 155 bikers initially indicted on “engaging in organized criminal activity” charges in the May 2015 shootout that left nine bikers dead and 20 injured.

Prosecutors sought re-indictments May 9 against 24 bikers on new charges, including murder, riot, tampering with evidence and weapons charges.

In a motion filed Monday, the Houston attorneys representing Pilkington, a 40-year-old Bandido club member from Mexia, ask that the re-indictment be quashed because of the way it was obtained.

“A felony case in Texas must proceed by indictment, but cannot proceed by two indictments,” the motion by attorneys Paul Looney and Mark Thiessen states. “Yet that is what the state has apparently attempted to do herein, although it is not entirely clear whether the state intends the new indictment to supplant or to merely supplement the prior indictment, which has not formally been dismissed.”

In seeking the new charges, prosecutors won new indictments but filed them under the original cause numbers. They did not dismiss the charges of engaging in criminal activity but have said those charges will not proceed.

Looney and Thiessen claim such methods violate the Texas Code of Criminal Procedure.

“An indictment cannot be ‘supplemented’ or superseded by way of a new indictment,” the motion claims. “There is nothing in statute, rule or law that allows the state to do what they have attempted to do herein. New charges require a new indictment, proceeding under a new cause number.

“Once a case has been initiated by indictment, the indictment can be amended, but such amendments can only be made pursuant to Tex. Code Crim. Proc. Arts 28.10 and 28.11. These procedures were wholly ignored by the state, and therefore the indictment issued on May 9, 2018, in this case is improper as a matter of law and must be quashed and dismissed,” the motion states.

Of the 192 bikers arrested after the melee, the DA’s office has dismissed or declined to prosecute all but those who were re-indicted May 9.

The attorneys argue that those charged with riot now cannot be tried on that charge. They cite a three-year statute of limitations on riot charges that expired last month and say the indictments were not returned properly.

“We are of the opinion that the second indictment was unlawfully obtained and cannot now be lawfully obtained,” Looney said Monday. “Just when it was beginning to look like the McLennan County District Attorney’s office had discarded the ‘Book of Waco’ and chosen to follow the Code of Criminal Procedure, we found that they are still making their own rules and have now made an inexcusable blunder.”

McLennan County District Attorney Abel Reyna did not return phone messages Monday. His first assistant, Robert Moody, said he had not seen the motion to quash the indictment and declined comment.

No hearing date has been set on the motion.

The Texas Penal Code defines a riot as the assemblage of seven or more persons resulting in conduct which creates an immediate danger of damage to property or injury to persons; substantially obstructs law enforcement or other governmental functions or services; or by force, threat of force, or physical action deprives any person of a legal right or disturbs any person in the enjoyment of a legal right.