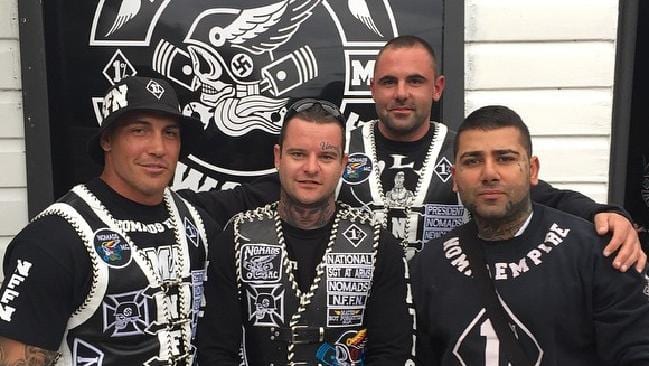 MOTORCYCLE clubs throughout the South Burnett and beyond are working hard on breaking the stigma that some say has been unfairly cast on them.

In some corners of community there is a stigma that motorbike gangs are getting up to no good but according to Secretary for the South Burnett chapter of the Aces and Eights social motorcycle club, Hayley Marie, it just is not the case.

“Anyone that has ever met us has got nothing bad to say,” she said.

The social motorbike club secretary was joined by over 500 riders from various clubs and areas throughout Queensland at the Bikers 4 Farmers drought meet in Kingaroy on Saturday September 15 which raised in excess of $5000 for our farmers.

The event organisers were tireless Wooroolin business owners and long term fundraisers for the community, Kerrie Bantoft and Lynnsay Fryer.

Miss Marie said this was nothing new for the motorcycle community.

“Our club gets together almost monthly to raise money for various groups,” she said.

“We put on a breakfast just this morning which raised $250 for today’s event which we gave to the Salvation Army people at the gate.”

Miss Marie who runs the Kingaroy business, Aces Auto Shop with her partner Harley Cash said the motorbike community looked out for each other.

“We are a really close knit community,” she said.

“The kids love it as much as the adults.”

Maddog is the President from Loners Motorcycle Club in Gympie and he suggested people should not be so quick to judge.

“Being in a motorcycle club, we try to get out and support the community as much as we can,” he said.

“Any events that are coming up we try to get our 80 members involved.”

Maddog believed there was an unfair stigma attached to being in a motorcycle club.

“Here we are at this great event, raising lots of money for our farmers in need, but it is one of those things, what can you do?” he said.

“There is no egos, no one is being rude, we are all after the same thing and that is helping one another and being able to ride.”

“What more can you ask for?

Members of six outlaw motorcycle gangs have defected and are planning to establish a new Nomads chapter.

The Nomads will join rival gangs the Devil’s Henchmen, the Satan’s Riders, the Black Uhlans, the Outlaws, the Rebels and the Bandidos across the Bass Strait.

The exact location for the new chapter is  still unknown, and the move comes after a handful of members of other clubs, including the Rebels and the Outlaws defected,  ABC News reported.

The Nomads are already established in New South Wales and South Australia, but will be the first time they branch off the mainland.

Police Commissioner Darren Hine was unwilling to discuss details of the impending arrival.

‘We’re concerned with any outlaw motorcycle gang that is coming to Tasmania or operating within Tasmania,’ he said.

Ibrahim is currently serving a nine year sentence in jail for planning to supply illegal firearms.

Police argue members of the Newcastle charter have been going ‘tit for tat’ with rival gang, the Finks for over 12 months, with seven drive by shootings and firebombings involving the gangs across the Hunter Valley throughout the first nine weeks of this year.

The Newcastle chapters of the Finks and Nomads have seen their numbers rise in the first few months of 2018, as the two groups battle for supremacy in the region.

Police allege the influx of gangs in Tasmania have surpassed it’s South Australian counterparts, with over 260 known members residing in the state.

‘We know they are coming here to set up criminal enterprise networks and we want to make sure the Tasmanian community is well protected against these groups.

The news comes after Tasmania began the process of implementing laws banning bikies from wearing club colours, a step that New South Wales and Queensland have also taken.

Up to two dozen Nomads OMCG members gathered in Canberra last weekend where the photo was taken.

The powerful Strike Force Raptor and its strict anti-consorting laws mean bikies can no longer gather together, forcing them to the nation’s capital.

Tajjour, 34, a former vice president of the group and convicted killer, posted the image and a series of others to Instagram from the weekend’s celebrations.

For the laws to be effectively imposed in Tasmania, the Police Minister would have to specify which outlaw figures are unable to wear their colours in public or associate with one another.