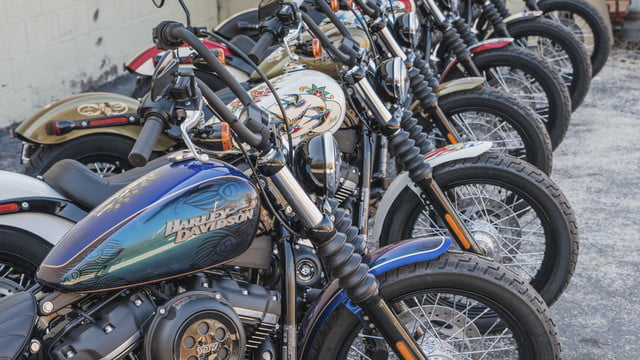 Rich Duprey
(TMFCop)
After Harley-Davidson (NYSE:HOG) reported a big 13.3% decline in motorcycle sales in the third quarter, it was easy to think that President Trump’s call to boycott the iconic bike maker was having an impact.An analyst at BMO Capital Markets pointed to the overlap between Trump’s supporters and those who ride Harley motorcycles, as well as rival Indian Motorcycle dealers anecdotally reporting an uptick in Harley trade-ins, as an indication the call to boycott the bike maker was having an impact.

While there would seem to be circumstantial evidence pointing to cause and effect, there are probably more basic reasons behind the sales plunge: Harley-Davidson motorcycles are still too big and too expensive for today’s motorcycle buyer, and the company’s core customer continues to age out of the market.

Little to no impact

No doubt some riders may have heeded the call to boycott Harley. Based on the mistaken assumption the bike maker was hurting U.S. jobs by moving some production overseas to circumvent the president’s trade tariffs, they might have decided to trade in their Harley for an Indian. The problem, of course, is that Polaris Industries (NYSE:PII), which owns the Indian brand, was also shifting some production to Poland to skirt the tariffs.

Moreover, while Polaris says Indian did post sales growth in the quarter — it doesn’t give hard numbers, it only said sales were up in the low-single-digit percentage range — it was the brand’s weakest performance since it bought the nameplate out of bankruptcy. If Harley riders were actually trading in their bikes for Indians, they didn’t contribute all that much to Indian’s total. And since annual Indian production is far less than what Harley produces, you’d expect the impact to be greater.

Yet challenging the idea that people were actually boycotting Harley is the fact the third-quarter sales figure is actually in line with the rate of decline the motorcycle maker has experienced over the past two years. The 13% drop is about what should be expected.

Furthermore, Harley unveiled its new lineup of bikes in late August (as it usually does); buyers may have been waiting to see what the motorcycle company was going to come out with.

Whether the fourth quarter is going to be worse than the last is anyone’s guess, but the period is typically Harley-Davidson’s weakest and it has been posting numbers as bad as it’s seen since the Great Recession. Seeing U.S. sales slip to the 20,000-unit level, a near-15% drop, wouldn’t be surprising, and it wouldn’t have anything to do with tariffs, Trump, or boycotts.

Harley-Davidson understands the market has changed, and after delaying the inevitable, has laid out a road map to recapture its growth trajectory. People can quibble over the exact path it is taking, but the company knows the bike market of the future is one of smaller, lighter, and less expensive motorcycles.

The problem is it is delaying introducing these bikes into the U.S. market. Harley-Davidson has plans for motorcycles in the 250 cubic centimeter to 500 cc range, but they’re not coming for another two years at least and they’re intended for the Indian (the country, not the motorcycle) market. India is the linchpin to Harley’s plan to have foreign motorcycle sales volume account for half of its total. When the U.S. market will see these bikes, if ever, is unknown.

Although it makes for good clickbait to say the president’s call to boycott Harley-Davidson was a big factor in its sales performance, a closer look suggests there are far more likely — and mundane — reasons for the decline. The bike maker has problems, to be sure, but I’m fairly certain it’s not because people have suddenly chosen to give up the “Harleys forever” lifestyle and have their Harley logo tattoos removed.