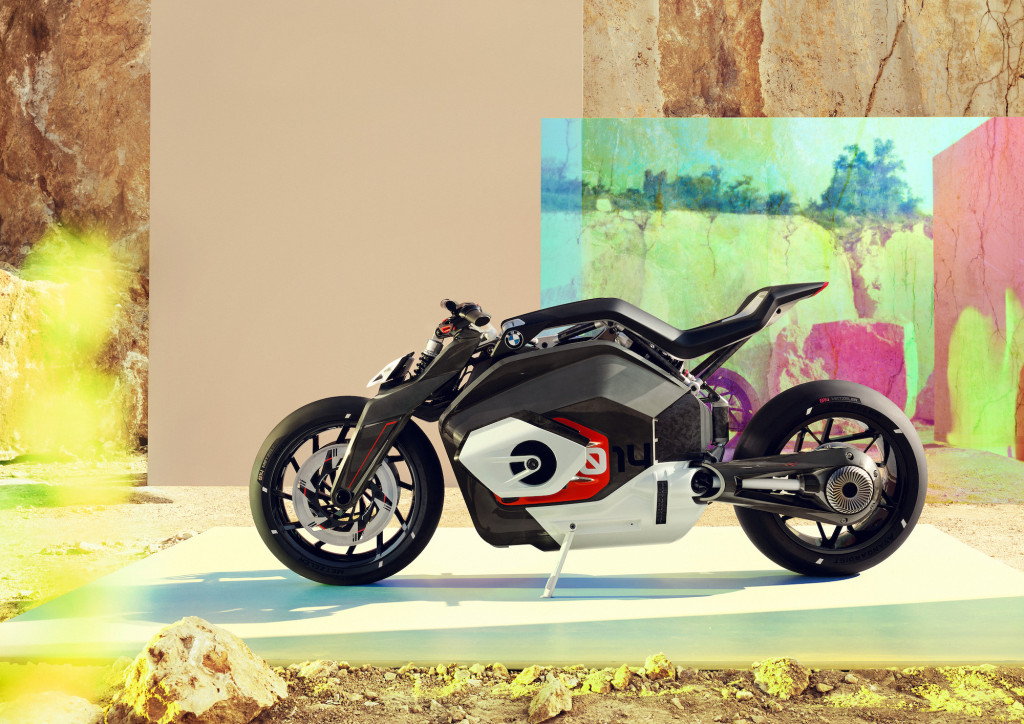 BMW may be getting closer to unveiling an impressive new electric sportbike that could rival the likes of the Zero SR/F and Energica’s Ego. At least that’s what these recent BMW electric motorcycle patent drawings seem to indicate.

The patent drawings from BMW show an electric sport bike with an unconventional design.

Unlike most motorcycles, which are built on a standard frame, BMW’s patent drawings show a frameless motorcycle design.

Instead, the major structural component is a sealed box containing the batteries and controller.

The head tube of the bike is mounted fore of the battery box, while the motor is mounted just below and aft of the box.

The swingarm mount appears to be mounted to the motor assembly, which would keep the swingarm pivot and the motor axle as close to each other as possible, simplifying chain or belt tensioning.

he design may be novel as far as electric motorcycles are concerned, but it isn’t entirely new to BMW.

The BMW C Evolution electric scooter actually adopts a similar design, with a sealed battery box serving as a structural member in lieu of a typical frame. The C Evolution is a five-year-old design at this point, though it has undergone a number of design improvements over the years.

Could this be a high-performance BMW electric motorcycle?

Yes, it appears likely that this could be a high-performance BMW electric motorcycle — something that could presumably compete with the Zero SR/F and the Energica Ego.

BMW is no stranger to sport bikes, of course. And the electric motorcycle seen in these patent drawings appears to line up well against the BMW F800 with nearly identical geometry, handlebars suspension linkage, and even the same wheels.

he next question will of course be, “How much does it cost?”

If the electric motorcycle seen in this patent could pump up those figures into true sport bike numbers, the motorcycle could easily command a price in line with the $18k-$22k range of Zero and Energica’s sport bikes.

But until BMW gives us more info, any speculation about the price is simply that — speculation.

Related Store owned by a close associate of a slain Hells Angels’ member has been raided by anti-gang police as part of a drug trafficking investigation.

This is exciting news! Another legacy manufacturer getting into high-performance electric motorcycles!

As much as everyone likes to dump on Harley-Davidson as if it was a competitive sport, the company should be commended for being the first big motorcycle manufacturer to enter the electric market. I believe that it is at least in part due to that brave move that we are now seeing large companies like BMW and Kawasaki making their own in roads into high-performance electric motorcycles (even if Kawasaki’s electric sport bike specs are kind of embarrassing).

This BMW electric sport bike could be a force to be reckoned with. And with BMW’s design chops, it could look the part, too.

I’d recommend keeping an eye out for whatever BMW is working on here, because this looks very promising.

Check out the BMW Designs