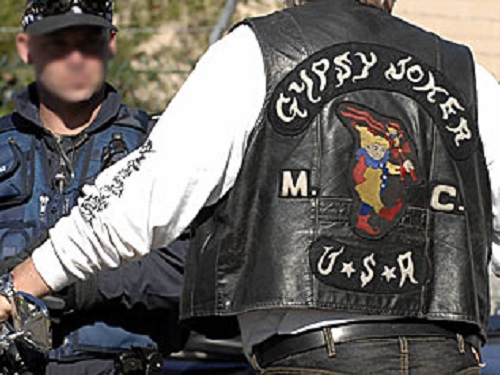 Gresham resident Ryan Anthony Negrinelli, a past member of the Gypsy Joker Outlaw Motorcycle Club, on Wednesday pleaded guilty to conspiracy to engage in racketeering in connection with the 2015 kidnapping and murder of a former club member.

Negrinelli, 37, is the third defendant to enter a guilty plea in the case.

The racketeering charges stem from the 2015 kidnapping and killing of Robert “Bagger” Huggins, 56.

Portland’s Gypsy Joker president Mark Leroy Dencklau ordered the attack on Huggins and others helped, according to another co-defendant, Tiler Evan Pribbernow, who has cooperated with the government and also pleaded guilty to racketeering.

The June 30, 2015, kidnapping and subsequent killing was in retaliation for Huggins’ burglary and robbery at Dencklau’s Woodburn home earlier that month, the government has alleged.

Loggers found Huggins’ battered body dumped in a Clark County field. He had a fractured skull, a broken rib, a broken leg, a removed nipple, nails driven through his boots, slash wounds to his back and face and many blows to his face, authorities said.

Racketeering, murder and kidnapping charges are pending against four others, who are scheduled for trial Sept. 29 before U.S. District Judge Michael W. Mosman.

As part of his plea agreement, Negrinelli acknowledged that the motorcycle club, from at least January 2008 until October 2018, was an “outlaw” organization whose members followed a written code of conduct, wielding their power through intimidation, violence and murder while enriching themselves through extortion, robbery and drug distribution.

Eighteen people were shot – including one fatally – after a large fight broke out among several motorcycle clubs on the city’s East Side, Cleveland

Huggins had targeted Dencklau’s home after getting kicked out of the club for stealing and breaking club rules, prosecutors have said. Dencklau’s then-girlfriend was tied up and Huggins stole some of Dencklau’s property, including guns, according to the government.

At the time of Huggins’ killing, Negrinelli was a “prospect’’ to join the club. After the killing, he became a full member who went by the nickname “Striker” before splitting from the club in mid-2018, according to a prosecutor.

Assistant U.S. Attorney Leah Bolstad, at a prior hearing, said Negrinelli was involved in a “premeditated, planned hunt of someone who angered the group he was part of.”

According to Bolstad, Negrinelli helped grabbed Huggins in the driveway of a Portland home and put him into an SUV, where he and four others beat him and drove him to a shed in Woodlawn, Wash.

Negrinelli helped place Huggins in the shed, where the defendants continued to torture Huggins, according to Bolstad. In his own words, Negrinelli told Portland detectives after his arrest that he “blasted,’’ or punched, Huggins a few times, Bolstad said.

Negrinelli also used water-boarding on Huggins, placing a scarf over his mouth and pouring water into it, triggering a choking response, according to Bolstad. He also helped apply burning hot wire to Huggins’ body, she said.

While others dumped Huggins’ body, Negrinelli and two co-defendants drove away in another car to discard weapons, throwing baseball bats into brush off the side of a road, Bolstad said.

Negrinelli is scheduled to be sentenced at 10 a.m. on June 15.

The racketeering conspiracy offense brings a maximum sentence of life in prison. If Negrinelli continues to accept responsibility pending sentencing, prosecutors are expected to recommend a 20-year sentence.

Aside from Negrinelli and Pribbernow, Gresham resident Earl D. Fisher also pleaded guilty in June to the racketeering conspiracy charge.

Biker sometimes are looked upon different and makes them feel uncomfortable. So They Started A Church Where They Feel Welcome

Another co-defendant, Joseph Duane Folkerts, 62, was recently assaulted while in custody at Inverness Jail, according to his defense lawyer Andrew Kohlmetz. He was in the cafeteria of the jail when Anthony Kronus Swift, 49, is accused of approaching him and punching him in the face with his fist.

Swift, in custody on alleged rape and sex abuse allegations in connection with assaults against four women, is now charged with fourth-degree assault stemming from his jail encounter with Folkerts on Feb. 21, court records show.

Court records say Swift was a co-founder of the Krude Rude Brood, a white supremacist gang based out of Portland.