In America, we support our soldiers, these men and women are the ones who volunteered to put on the uniform so citizens in this country were not speaking German, speaking Japanese or Russian for that matter. From the battles fought in the Revolutionary War to the Deserts of the Middle East those men and women have stepped forward. They were maimed and killed for this country, they are the few who showed their true colors when it came to their beliefs and what they stood for.

This is why today when I talked with a biker who was a representative for a group of guys that originally wanted to form a chapter of a military motorcycle club, but was denied a chapter, Why? Because their brother and president were ex Leo 12 years prior. I was fuming pissed and had to get their story out. Just to show how much this protocol crap has gone overboard.

Over and Over again I will hear people write in complaining how much I bash cops. For the last time as Chris Farley would say “For the Love of God and everything that is Holy”. The only time I’ve had problems with cops is when they put on a 3 pc patch “WHILE” being an active duty officer. When they decide to hang it up, that’s when they become a regular citizen in my eyes, they no longer have any conflict of interests of loyalty with two competing groups. And for those keyboard warriors that want to cry about that, learn the damn history you speak of so much and get a clue. 1%er clubs have members that were former LEO, Former Corrections Officers, Former Firefighters. Shit, the link below even shows one of the Big 4 had active duty ones (Something I never agreed with because they were still active). One firefighter was recently fired for his affiliation over his association with the Outlaws M/C.

Point being, 1%er clubs have taken in those who they consider brothers who were former LEO and Firefighters. The way I look at the situation is pretty normal and in line with what most of the bigger clubs do.

The situation today, when I talked to this reader, was even more fucked up when I heard that this one brother of theirs was a Purple Heart recipient. So I stepped back, thought of the irony of the situation that these group of brothers was facing. All of them were former military, three of them served overseas in that fucking desert, the president was awarded a Purple Heart, they were told they could have a chapter of this club, as long as they left behind not only their President but a fellow warrior and servant of the United States. Man, “Get the Fuck Out of Here with that shit” plain and simple.

For one, where the hell is the actual brotherhood being a soldier, one who served this nation and was wounded? Soldiers are supposed to stick together, in service and out. Then to add insult to injury you tell the rest of this man’s brothers to leave him behind because he was a fucking Leo 12 years earlier? I am happy to say to the club that did this, you have received the “Ass-Monkey” of the year award. It’s only because I promised to keep the identity and location of these brothers under wraps, I haven’t called your pathetic club out on front street. I would love nothing more than to blast your name around the world for being a complete bunch of circle jerkers.

I’m still shaking my head on how this club played these guys. This protocol shit has gone that far? For one, I don’t remember this kind of crap happening in my time, at least not in Chicago anyway. Like I said above, 1%er clubs have been taking in ex Leo for decades, so why these ass-pumpers would deny a potential brother who had so much to offer that club is beyond me. One would think with how hard it is to find some good brothers to be apart of a motorcycle club these days, a club would jump on brothers like these. This group, they actually were straight up about the brothers past, they put all their cards on the table, personally, that demands respect.

I’m happy to say that these group of guys turned down the offer to leave their brother behind, that you keyboard warriors is what “Honor and Loyalty” are about. They decided that they will form a 1 pc military riding club. They are working tirelessly to get their bylaws together, designing their patches and getting the riding club in order. It’s a huge shame that a moron club lost these types of potential brothers over something they perceived as “Against the rules of motorcycle clubs”. Jesus Christ, if this is how the motorcycle club culture is starting to turn out, what chance does it really have to survive in the next 10 years?

To submit your biker story or request, bitch us out or even give us a compliment email us at insanethrottle@hdbikernews.com
“Motorcycle Madhouse” Free Audio Podcast You can subscribe to our channel at https://www.spreaker.com/show/2795835
Insane Throttles Motorcycle Superstore
https://cubbiesroc1973.wixsite.com/insanethrottle
Don’t forget to go over to Insane Throttles YouTube Channel where the Madhouse will also be on for those who like Youtube You can subscribe to our channel at
https://www.youtube.com/c/InsaneThrottle 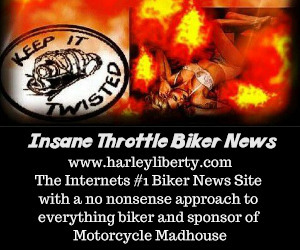