A motorcycle phenomenon started in Berdoo in 1948. A club that would become legends within the biker scene. A club that over the years has had to take on the government in a chess match that would play out since the late 70’s.

The Hells Angels started to take root when the Legend Sonny Barger put down a plan to unite all the Hells Angels and start them on the march to worldwide dominance in the motorcycle club scene. Friend or foe. You cannot ever take away what that man and those early scooter tramps achieved. 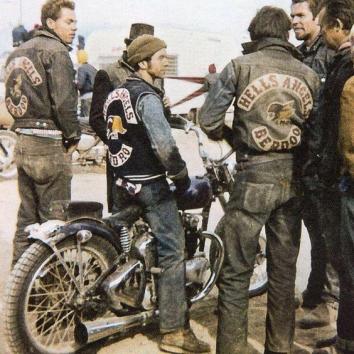 If you would like to send over a congratulations here is their Hells Angels guestbook page.

We just put up a new Biker Angle over on Youtube. Check it out

Founded in 1948, the Hells Angels motorcycle club has been a pop-culture mainstay for decades. Books, television and movies have mythologized them endlessly.

The story began on March 17, 1948, in San Bernardino, California, and the name is most-commonly attributed to the Howard Hughes movie of the same name, about World War II bombers. But that is where the military connection ends.

The Hells Angels website refutes the commonly held story that the group was founded by ex-military misfits and outcasts. Of course, later on, members from various branches of the military would join HAMC but it was not a military club to begin with.

The group’s logo, the Death Head, is easily one of the most recognizable brands of the 20th century. It’s since been copyrighted in the United States and internationally.

The “Berdoo” chapter is still alive and well to this day. That group’s 70th anniversary party is scheduled for this weekend. There are no chapters listed in Texas.

More clubs began popping up soon after in and around California. In 1957 Sonny Barger founded the Oakland chapter. He would end up becoming the face of the club in pop-culture, and to this day remains a cult figure.

Barger’s autobiography, “Hell’s Angel,” was released in 2001 to wide acclaim by motorcycle fans and others interested in the biker subculture.

By 1961 the club had a chapter in Auckland, New Zealand, and by the end of the decade the first of many chapters was founded in Europe. Australia, Africa and Brazil were still to come. Today there are even clubs in Turkey.

n 1965 LIFE magazine went on the road with the woolly outlaw bikers for a series of photos featuring the group riding and interacting with polite society. Two years later Hunter S. Thompson wrote the violent non-fiction book “Hell’s Angels” about his time riding with the gang.

They maintain an allure within mainstream culture, with TV shows like “Sons of Anarchy” adding to the mystique. Barger himself appeared on the show a handful of times as a pimp. The gang in the TV show is purely fictional, although it does have elements of real, seedy events in outlaw biker culture.

Deadly encounters between the Angels and other clubs have kept them squarely outside the lines, and the actions of bad apples among them haven’t helped matters.

March 29th on Motorcycle Madhouse- Popeye and OG from Texas Biker radio and a special interview with Jim Harris . This episode will be dedicated to discussing the Waco “Twin Peaks” episode and the win against Abel Reyna