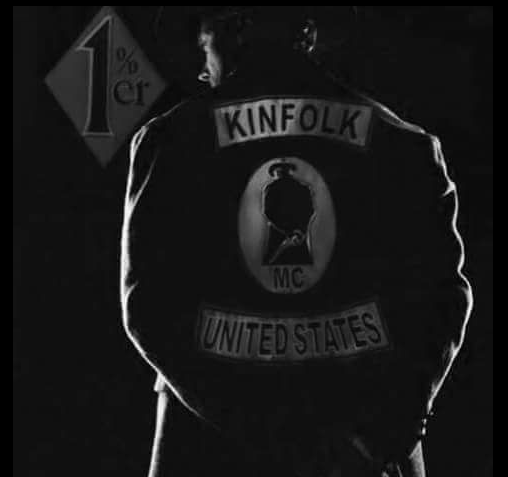 Insane Throttle has done some editorials on Kinfolk National President Aaron Davies in the past. Those articles centered around the question if Aaron Davies participated in informational intelligence for the DEA and other governmental authorities. Insane Throttle presented the facts given to us by sources and gave Aaron Davies a chance to reply on Motorcycle Madhouse. The audience was asked to make their determination of what was presented and response giving by Aaron Davies.

To give a background history of the Kinfolk Motorcycle Club would be appropriate so the audience just tuning in can get a better idea of this club and origin. The Kinfolk M/C was formed by former members of the Bandidos M/C. Members including Chopper Dan, who was rumored to be giving testimony against Pike and Portillo, the Bandidos Nationals currently on trial for Rico acts, formed the Kinfolk M/C.

Chopper Dan has since left the Kinfolk M/C. He went on to form another club which we won’t mention in this article. The reason being, we will not give credence to a club started by a “Rat”. After Chopper Dan left the Kinfolk M/C, Aaron Davis somehow became the new Kinfolk M/C president. The Kinfolk M/C claims to be a 1%er club. It openly admits they do not do stuff the traditional 1%er way. One of the untraditional ways in which the Kinfolk M/C operates is to allow law enforcement into its ranks. The Kinfolk has had representatives tell Insane Throttle this is not the case, but we have determined their version not to be truthful.

Insane Throttle makes that observation not only from talking with Aaron Davies himself, but from the mountain of evidence gathered from sources outside Insane Throttle. The Kinfolk does in fact, let current and former Law Enforcement into their ranks. If this is their policies and all the brothers have agreed to the bylaws permitting law enforcement into the club, then why lie about it? It’s your club. Why give a crap what others think about what you do? We think it’s because the Kinfolk decided to wear the 1%er diamond.

It is far from Traditional for 1%er clubs to have Law Enforcement in their ranks. Personally, I don’t know why they just don’t take off the 1%er diamond and build their club in peace. A lot of 1%er clubs who’ve been established for decades are starting to remove the 1%er patch because it’s been so diluted. Add in the fact the diamond brings so much heat to a club from law enforcement. Who the hell wants to deal with all the problems a 1% patch brings with it?

Insane Throttle has received numerous reports from Clayton, New Mexico regarding concerns about the Kinfolk M/C. Clayton is the hometown to National President Aaron Davies. The current Chapter President is Thomas Padilla, who works for the local electric cooperative. It is our understanding that he also has a Jordan Roberts – Ex corrections officer in the chapter as well. Clayton residents have grave concerns regarding the operations of the chapter. Especially with Aaron Davies and his relationship with Police Chief Scott Julian.

Residents feel their concerns have fallen on deaf ears because Aaron Davies is suspected of working with the authorities. They feel because of the working relationship Aaron Davies has with law enforcement the Kinfolk have been giving a free ticket to do what they like by the Chief of Police. The residents talk of the local Kinfolk chapter making large charitable donations to various community causes in exchange for cover to conduct their real activities. Which include drug trafficking and harassing local businesses.

Is there something to the citizens claims Police Chief Scott Julian is some how working with the Kinfolk M/C?

On this question Insane Throttle must do much more research. The City of Clayton, New Mexico is made up of about 2980 citizens. It’s annual police budget is only $857,102. This number is the latest provided on their website for fiscal year 2013. It is 2018, we imagine the number could be higher or lower. The Clayton Police Department has an ongoing recruitment for new officers. Sounds like they have a high turnover on their force.

Could cooperation be possible between the Chief of Police and Aaron Davies? Anything is possible these days. If you look at how small the town is. The annual budget. It’s very well possible the Chief of Police does not make much money and has to supplement his income. It’s also another possibility the chief knows Aaron Davies might be working with the authorities; On their request lets Davies do what he wants. This type of situation has been seen time and time again in the motorcycle club scene when someone turns informant.

Insane Throttle will contact the Clayton Police Department and request an interview with Scott Julian. Insane Throttle will try and get answers to the citizens concerns regarding his relationship with Davies. We will ask additional questions of the Chief regarding an incident where the State Troopers had to show up to a local festival. This was because of concerns the Bandidos and Kinfolk would be at the same event. The question will center around why he chose not to take this preventative step himself. Instead-Concern citizens had to go directly to the State Police for help to make sure the festival was safe.

The 1%er patch like I said earlier has become more trouble than it’s worth. It’s true. Most of the bigger 1%er clubs are now removing them because the patch has been watered down from all the pop-up clubs. Not to mention the heat the designation brings from Law Enforcement. What’s particularly cool to watch is the motorcycle club scene making a course correction and going back to its roots. The reason we all know the 1%er patch came into existence was because of the AMA after Hollister. Now some of those same clubs are removing the 1%er patch and going back to the traditional way things use to be. Of course I’m not saying the removal of the patch makes them any less than what they are. But to see some of them say “Fuck This” and bring the motorcycle club scene full circle is pretty cool to watch.

Maybe some of you clubs like the Kinfolk and others who adore the 1%er designation should learn from the great motorcycle clubs. Isn’t it better to build a club without all the noise and attention you get because you wear a patch like the 1%er diamond? An honest question to members of the Kinfolk M/C. Did you honestly think you would not get flack for wearing a 1%er diamond allowing cops and former law enforcement into your club?

Hey, it’s cool to want to do your own thing. Live by your own bylaws and not want to deal with anyone Else’s rules. The ones who started your club were ex-Bandits. To those I ask. What would you of thought of the Kinfolks if you were still wearing the “Fat Mexican?” If you’re being honest in answering the question! You would’ve laughed and thought it was all a joke. You would’ve said ” 1%ers don’t allow cops into the club.” It’s been established cops and ex law enforcement is in your club. If that is how the Kinfolk want to roll than more power to you. At least have the dignity and respect for yourselves to set a course correction for the club and get it on the right track.

Personally, I think the Kinfolk would gain respect from the motorcycle club community if they removed the 1%er patch. I know it would definitely cause the members of the Kinfolk less headaches. It would probably give the Kinfolk more opportunity to grow. Let’s face it. Most people nowadays have no interest in being apart of the 1%er scene. If your officers were smart on the National level they would be taking advantage of this opportunity. But hey, not my club. I can give suggestions because I’ve been there and done that. I’ve got the unique opportunity to know most of the clubs in the scene and what is all happening. If you want your club to make it. Then take suggestions when you can.

Insane Throttle Facebook Question of the day- Do you think the 1%er patch has been watered down? Would you join a 1%er club?