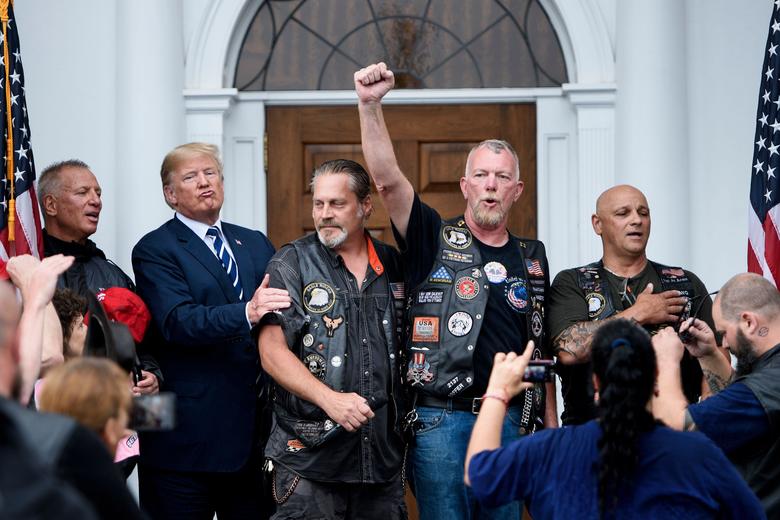 Breitbart published an interview with President Donald Trump on Wednesday in which he suggested that his supporters in the military and police would rally to his side in a way that would be “very bad, very bad” if things get “to a certain point.”

Here’s the full quote in context, with the relevant portion highlighted in bold:

“So here’s the thing—it’s so terrible what’s happening,” Trump said when asked by Breitbart News Washington Political Editor Matthew Boyle about how the left is fighting hard. “You know, the left plays a tougher game, it’s very funny. I actually think that the people on the right are tougher, but they don’t play it tougher. Okay? I can tell you I have the support of the police, the support of the military, the support of the Bikers for Trump – I have the tough people, but they don’t play it tough — until they go to a certain point, and then it would be very bad, very bad. But the left plays it cuter and tougher. Like with all the nonsense that they do in Congress … with all this invest[igations]—that’s all they want to do is –you know, they do things that are nasty. Republicans never played this.”

The suggestion appears to be in reaction to the ongoing investigations of his presidency in the House of Representatives. It came in the context of Trump claiming that former Speaker of the House Paul Ryan did not go far enough in allowing House committees previously under Republican control to issue subpoenas to those considered to be Trump’s political adversaries.

Here’s how Breitbart put it:

Trump told Breitbart News in an exclusive lengthy Oval Office interview that Ryan blocked issuance of subpoenas to people he thinks should have been investigated on the political left, and now that the Republicans no longer have the majority in the House, people Trump says Ryan protected may have gotten away with whatever they did that warranted investigation.

Trump said that House Freedom Caucus Chairman Rep. Mark Meadows (R-NC) and his predecessor and fellow conservative Rep. Jim Jordan (R-OH) wanted to be tougher with the left, but that Ryan would not let them.

“Paul Ryan wouldn’t give the right to have any subpoenas,” Trump told Breitbart News. “Okay? Now in all fairness, Meadows and Jordan and all these guys, they wanted to go tougher, but they weren’t allowed to by leadership.”

Trump’s comments came in a wider part of the conversation about how the left is more “vicious” than the right—and that the left in American politics plays “cuter and tougher.”

While it’s perhaps impossible to dissect the precise meaning of Trump’s words here, it appears to be a vague threat that “tough” supporters in the military and police—who are presumably armed and whose work can involve using physical violence—will do something that will result in a “very bad, very bad” outcome if pushed to a “certain point” by the president’s political opponents.* In this context, that certain point might be political investigations reaching a conclusion of impeachment, or maybe just efforts to enforce subpoenas against the president, his family members, and allies. (It could also come in the context of the president’s “vicious” political opponents voting him out of office in the 2020 election, which the president has repeatedly said Democrats cannot win “legitimately.”)

Hells Angels ride off from E. 3rd clubhouse. Angels seen vacating in recent days.So where are the fearsome self-styled bad boys heading on their Harley hogs after 50 years at 77 E. Third St.?

Perhaps the “very bad” thing that would happen as a result of “tough” Trump supporters in the military, police, and Bikers for Trump being pushed “to a certain point” would be taking part in a peaceful protest that gets out of hand due to factors beyond their control. Maybe he’s talking about a less violent form of aggression that’s nonetheless “very bad, very bad.”

But the more obvious—and plausible—interpretation seems to me to be that the president is suggesting these armed political supporters would respond violently if his presidency is imperiled. Whether or not you view this as empty bluster, that suggestion alone should chill supporters of liberal democracy as much as anything Trump has ever said.