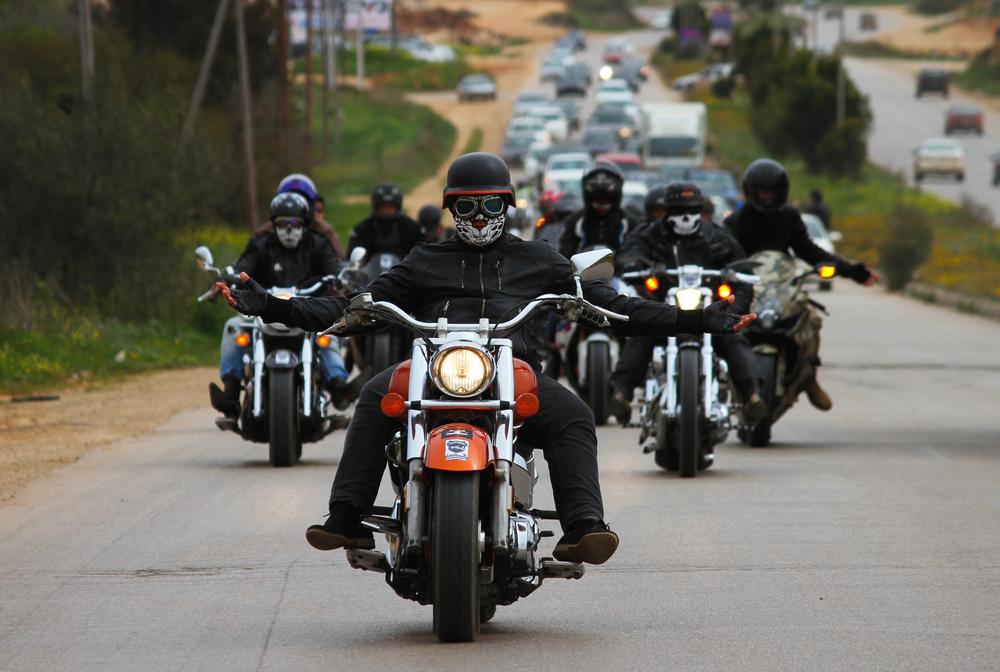 A MAN who had a top bearing the name of an outlaw bike gang in his car has been jailed after attacking members of a rival motorcycle club.

Ian Ewing, 44, was convicted on Monday of attempting to murder and assaulting bikers on the A98 road near Cullen, Moray, on September 8 2018.

A top bearing the name ‘the Blue Angels’ was found in Ewing’s car upon inspection.

The Blue Angels claim to be the oldest motorcycling gang in Scotland. It has been claimed that “Blue” stands for B*****ds, Lunatics Undesirables and Eccentrics.

A jury at the High Court in Edinburgh saw shocking video footage of Ewing and a group of accomplices, who have yet to be brought to justice, attacking members of the Nomads.

Jurors witnessed footage of Ewing and his sidekicks striking Colin Sutherland, John Sutherland, Edward Forrest and Nicky Syratt with a claw hammer, a tyre iron and a baseball bat.

Moments earlier Ewing had driven his Vauxhall Insignia at Colin Sutherland and collided with the motorcyclist forcing him to fall off his bike.

Jurors also saw Ewing and his accomplices use a knife to cut off waistcoats bearing the ‘Nomads’ name.

Police arrested Ewing shortly afterwards – he was in his car with a group of other men. When they searched his car, they found a hammer containing his DNA hidden beneath a passenger seat.

The head of the hammer also matched an indentation left on Mr Forrest’s helmet.

The gang – which was formed in Maryhill, Glasgow, – have been linked to a number of violent attacks since its formation in the early 1960s.

Officers were unable to establish whether the top belonged to Ewing or any of the other men who were in the car.

The story emerged after jurors convicted Ewing, of Aberdeen, on a charge of attempting to murder Colin Sutherland and of assaulting John Sutherland to his severe injury and permanent disfigurement.

Ewing’s co-accused, Patrick Noble, 52, was acquitted on the same charges after the jury returned not proven verdicts.

Wisconsin Legislature has filed a resolution to commend members of Bikers Against Child Abuse for their exceptional work with abused children.

Kyle Urquhart, 22, and Ian Yeomans, 57, were also acquitted earlier in the trial.

After hearing how Ewing had previous convictions for road traffic offences, Lady Scott deferred sentence and remanded him in custody.

She said: “I am calling for a background report and I will deal with you in this court on March 17.”

During proceedings, the court heard from 25-year-old Colin Sutherland. He told proceedings that he and a group of friends had spent the afternoon of September 8 riding around the north east of Scotland.

They had stopped in Elgin for a break at 4pm and then started riding again shortly afterwards.

He said that as they approached Cullen, he was “impacted” by a car and that he “came off”.

Mr Sutherland, whose address was given in court as being care of the Police, said he couldn’t remember very much about the incident as he had lost consciousness.

He told prosecution lawyer Andrew Bowen QC that he had a “vague memory” of hearing his club waistcoat being “cut off” his body moments after being struck by the car.

He said: “When I came too my waistcoat was off me so I assume it was taken off me.

“I have a vague memory of hearing it being cut.”

Nicky Syratt,34, said he was repeatedly struck with iron bars and hammers by men who wanted to “break” his knees.

He told Mr Bowen that he was struck from behind after seeing one of his friends being beaten up by four men.

He said he was going to help his pal when he was assaulted.

Mr Syratt added: “The last thing I can remember was a young guy telling me how he was going to kill me.

“I went in and out of consciousness.”

He said that one of his attackers also cut off his clothing. He added: “They had a knife. Someone had a knife and they cut off my leather waistcoat.”

The jury heard that the attack caused traffic to stop moving on the road. Motorists captured footage of the incident with their mobile phones. Jurors could see a group of motorcyclists beating men lying on the road.

The first of three Abilene Bandido bikers arrested for allegedly violently robbing a rival club member acquitted on all charges.

Joan Stewart,56, said she was frightened by what she witnessed.

“I saw another body lying on the ground as well. He seemed to be unconscious and in a pretty bad state.”

Police were called to the scene shortly afterwards. They arrested Ewing just a short time after that. He was in his car.

Describing the search, Inspector Machray added: “They were broken wing mirrors, a hammer, snoods, a mobile telephone and some sort of knuckle duster weapon.”

In his closing speech to the jury, Mr Bowen said that given the forensic evidence, jurors could be convinced that Ewing had carried out the attack.

The Scots founder of the infamous Comanchero outlaw biker gang has told how he dodged death in a horror road crash.

They agreed with Mr Bowen and found him guilty on four charges on Monday afternoon.

Following conviction, Ewing’s advocate Susan Duff told Lady Scott that he had worked as an Operations Manager for Mitie.

When Lady Scott asked Ms Duff what that job entailed, the lawyer replied: “He was in charge of maintenance contracts with the Police and Fire Service.

“However, he has since lost that job and has spent the past few months working on a self employed basis for Hermes delivery service.”

Ms Duff also said her client was a father of one. As his advocate was speaking, Ewing sat in the dock and shook his head in disbelief.

Ewing was then remanded in custody. He will be sentenced at the High Court in Edinburgh on March 17 2019.