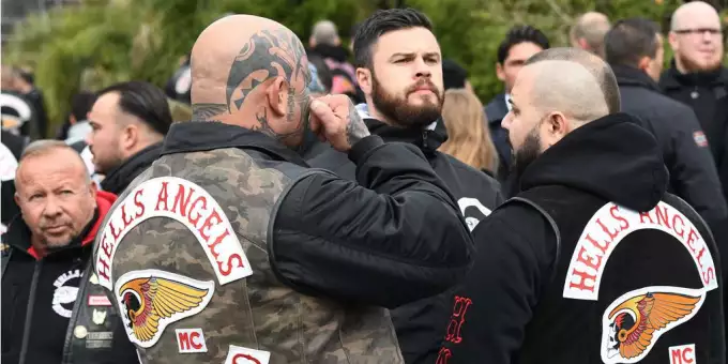 WESTPORT — Arrests at a Hells Angels fundraising event might have fueled more debate over a non-related issue — whether non-medical marijuana sales should be prohibited.

On Sept 5, the Hells Angels hosted an event, “Rainman Defense Party,” in Westport at 560 American Legion Highway, according to police.

Land on the property is leased by a New Bedford-based business duo, with hopes for developing a cannabis cultivation facility on site.

Averyl Andrade, owner of Between the Rows LLC, took issue with how her business dealings in town were connected to this unrelated Hells Angels fundraiser.

Law enforcement in Westport and other communities closely monitored the event, which drew close to 129 motorcycle riders, as well as close to 60 other vehicles on the property and on property across the street, according to the police release.

But toward the end of the press release, police noted that the property is used by Between the Rows LLC, who recently hosted a community outreach meeting and is seeking a host agreement for a craft cannabis cooperative.

“I absolutely feel this is part of the continued smear campaign established to slander and harass myself and both of my businesses,” Andrade said. “I had zero involvement with whatever party they are talking about or any other activities at the property other than the fact that I have leased land for the last six years to grow and provide chemical-free produce for our community.”

Andrade said she plans on complaining to town officials.

Police Sgt. Christopher Dunn, in response, said the department stands by the information.

“Everything we said is factual,” he said.

The property, owned by Timothy Barriera Sr., has been the site of other Hells Angels events, according to Dunn. He said the organization has used the site for fundraisers for the organization and for members who are under federal indictment.

Specifically, the event was raising money for Christopher Ranieri, a Lynn resident known as “Rainman.”

The arrest and release comes among some recent marijuana debates at selectmen and Planning Board meetings.

A group of residents submitted a petition to selectmen recently. In response, the Oct. 3 special Town Meeting will have an article looking to repeal a February Town Meeting vote, which legalized the sale of non-medical marijuana in town.

Andrade’s recent issues with the town police is part of a history of pot disputes on the property.

In October 2018, Andrade hosted an event on the property and was arrested and charged with illegal cultivation and conspiracy to distribute marijuana products.

She was arrested on a motor vehicle warrant and operating a vehicle with a suspended driver’s license.

The charges were later dropped and Andrade was named by selectmen in late 2018 to a Craft Cannabis Co-op Committee. The committee was part of a movement to allow farmers to grow marijuana and sell it outside town borders — the sale of non-medical pot was illegal in town at that time.