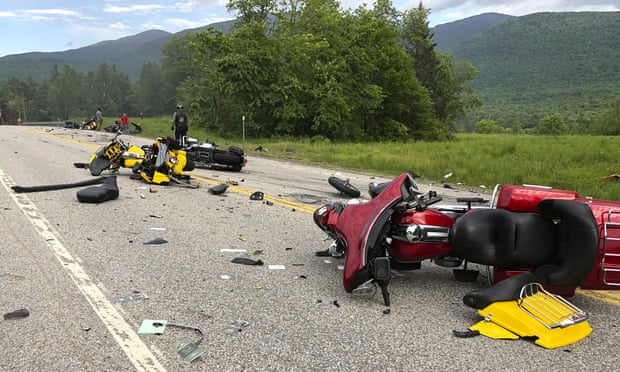 An insurer for the trucking company involved in a deadly crash in Randolph last year has reached a settlement with the estates of the seven motorcyclists killed, a survivor and a widow, an attorney involved in the agreement said.

Pilgrim Insurance Co., the insurer for Westfield Transport, will divide a $1 million payout between the parties, which will receive varying amounts, said Chuck Douglas, an attorney for Mary Lou Welch, the widow of Albert Mazza Jr., a motorcyclist killed in the crash.

Westfield Transport employed Volodymyr Zhukovskyy, the driver facing negligent homicide charges in the crash that killed the seven motorcyclists on Route 2 in Randolph on June 21, 2019.

As part of the settlement, a lawsuit that Pilgrim Insurance filed in federal court was dismissed. Lawsuits filed against Westfield Transport in state courts in New Hampshire and Massachusetts will also be dismissed, Douglas said.

Douglas said the insurance payout that the families are receiving is far from satisfactory, but it was the only compensation available to them. Westfield Transport is no longer in business.

“It’s a very inadequate amount, but it’s all we could do given the limitation,” he said.

The victims were members of the Jarheads Motorcycle Club, an organization composed of Marine veterans.

Zhukovskyy, who has pleaded not guilty, is scheduled to go on trial next year. Documents released earlier this week by the National Transportation Safety Board say that Zhukovskyy told investigators that he used heroin and cocaine on the day of the crash but did not feel that he was impaired when the crash happened.