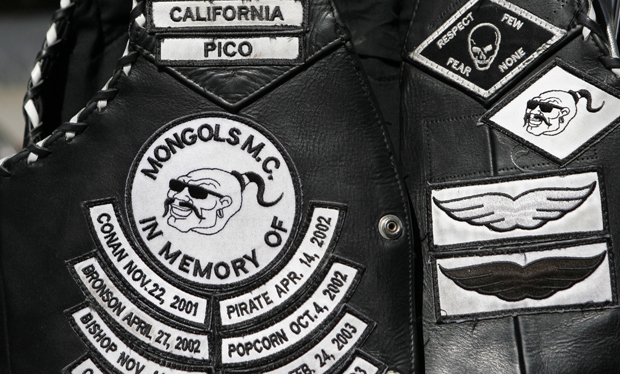 Two high profiled incidents have happened recently concerning biker rights. The two incidents are the governments attempt to skirt copyright law to get the Mongols Motorcycle Clubs patch and the other is the beating of Pagan Members in Pittsburgh by on-duty police. Where is the outcry from the motorcycle community? Where is the concern that the government has time and time again harassed motorcycle club members? It’s genuinely quiet telling the status of the motorcycle scene right now. It’s went from bikers to sticking with bikers to everyone for themselves.
Being the host of Motorcycle Madhouse and the Biker Angle, I’ve noticed a few things. People are initially outraged at the days news when they hear these stories but come the following day they are forgotten completely. What I find equally disturbing is all the talk and questions which consistently relate to interest in becoming members of a motorcycle club. Sure, there is a ton of interest in them, but support for them is almost non-existent. What? What do you mean? It’s straightforward really. If those who professed interest in clubs really cared they would be out there raising all kinds of hell with what has happened in just these two cases recently. Here you have the government of the United States trying to revoke a person constitutional right to free assembly but people just sit around and allow it.
This is what is scary in this country. People are to busy to get involved in something they claim to profess loyalty to. Who am I kidding? It’s always been the members of motorcycle clubs which had to fight the system for the benefit for the rest of the biker community. This fight started long ago when being a biker wasn’t cool. The fight those old timers put up against those who would harass a biker made it possible for those RUBS and LEO Lovers to play biker today. How are they repaid? People who just want to play dress up and ride off the reputation others had to pay for in time, money and even personal freedom. 2018 has the motorcycle scene being all turned upside down. You have people who want to act the part but not get involved in the fight. Instead, they get on the internet pounding away attacking those who they could only wish they had the balls enough to be apart of. It’s quite interesting really. Insane Throttle reaches worldwide through harleyliberty.com, Motorcycle Madhouse and Biker Angle. We get to see it all when it comes to the feel of the biker community.

One of the most ludicrous things we always run up against is people screaming about how 1%ers always treat others who want to start a club poorly. The best one is if you listen to some of the YouTube channels, how 1%ers are nothing but criminals. What’s funny is the person in the next sentence after bashing the club will turn around trying to compare themselves to 1%ers. Saying they live the Outlaw Life or they have a 1%er mentality. Weak ass shit if you ask me. The real reason behind them being hypocritical is they are weak and scared. Pissed off they couldn’t accomplish the honor of wearing a patch. So they naturally have to cover their shortcomings talking shit.

That divide within the biker community is starting to give the LEOS a way into a scene they were once looked upon as the competitor. Their job was simple. Bust the bikers, and our job was not get busted. Now we have within the biker scene these damn rubs or weekend warriors who just want to play biker, inviting the damn cops into it. They claim to see nothing wrong with cops being in their motorcycle clubs or see no problem with them in general. Meanwhile, club members are being profiled all over the country, beaten in bars. For example, The Pagans Motorcycle Club members being beaten by cops in Kopys Bar. Right now we have a three part video series which I interview a witness that was there that night. Also included was the full video of the incident. Many have asked why this wasn’t brought out sooner. It’s simple really. I knew the story would fade within a couple of days. So in order to keep it going, I released information a couple of weeks later. We cannot let the Pagans and Mongols Cases get buried like what happened in Texas, after Twin Peaks. It has to be kept alive in peoples minds if bikers are to get justice and accountability.

Media targets Motorcycle Club- America’s values and beliefs in no way reflect or condone those of Fourth Reich Motorcycle Club or any white nationalist group.
Do you comprehend what is happening in Texas right now when it comes to police profiling? Members of motorcycle clubs are getting pulled over and told they have to be photographed. If they are carrying a gun (with a valid permit and no record) they are being hauled off to jail. This is because the police can now designate them a gang member without due process. Where is the outrage from the biker community on this? Nope, none at all because it doesn’t affect them. The way of thinking is simple now. It’s someone else going through it, so why should I care? Why should I involve myself?
Here is exactly why you should be getting involved. If the US Government is able to win this case against the Mongols MC. Then every biker who rides with either an MC or any other biker organization is in deep shit. The government can backdoor their way right into Australian type VLAD laws. Bullshit you say! No, that’s straight up. The US Government is looking for the loop hole to try and take down peoples right to free association.

The government is nothing like it use to be. It’s now filled with power hungry people who want nothing but control. Bikers are a threat to the government. Especially the alphabet agencies. The government knows real bikers won’t stand for their shit. We won’t lay down to their wishes. Make no mistake; these alphabet agencies would love nothing more than VLAD laws here in the USA. Shit, some advisors to that law in Oz came from here within the states. USA agencies had a hand in helping pass them laws in OZ so don’t think they don’t have the same planned here. Many in the USA do not understand the extreme harassment bikers are going through in OZ. The cops are even messing with Christian clubs and HOG members. If they see those patches, they automatically pull them over and put people through the ringer.

What if the Mongols Motorcycle Club loose their case against the patch grab by the Government? Pagans MC Video Enclosed. Part 1 of 3.
Right now the battle lines have been drawn up. We have the Mongols fight their patch rights case in California. We have the Pagans fighting police brutality in Pittsburgh. Finally, we have ground zero in Texas. The only way the biker scene will win against all these fights is for people to get involved. Spread the word on the internet, blow up social media. Get on the phones and apply pressure to these politicians, prosecutors and cops. Don’t let them get away with this shit any longer. Bond together as a community and take these fights on. Don’t be that one guy or gal who let’s everyone else do the fighting so you can enjoy the rewards. Get out there and put the work into something you claim to love. We need everyone to stand up and be counted in this fight. With numbers and determination these fights can be won. The question now is. Will you get involved?