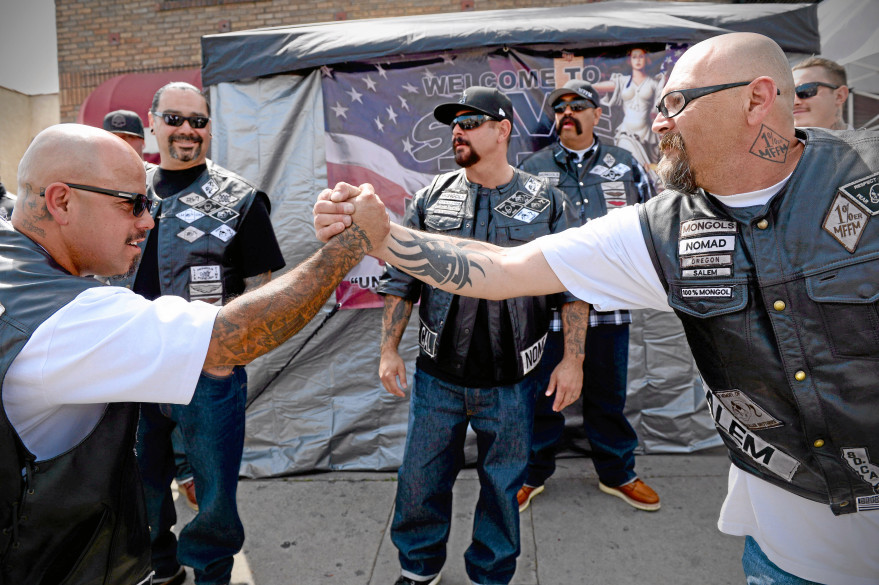 By James “Hollywood” Macecari
As many in the biker and motorcycle club scene already know. The Mongols Motorcycle Club is in a tough fight in Federal court. A fight in which the United States Government is trying to use Trademark Law to strip the Mongols Motorcycle Club of it’s colors. I’ve talked about this subject extensively on the Biker Angle over on Insane Throttles YouTube Channel. To watch the Biker Angle go over to www.insanethrottlebikernews.com and subscribe for free.

First off, I find it funny just how many people who truly ignorant. What do I mean? We’ve been seeing and receiving messages from people who have been making comments such as.

“The Mongols and 1%er are receiving a taste of what they do to other smaller clubs by not letting them wear their patches.”

“The Mongols is a bunch of thugs and gang members.”

I say this to those kinds of people. “You have no idea what the hell you’re talking about, nor do you understand what is at stake in this case.”

These are the kinds of problems the motorcycle club scene and biker lifestyle have been facing in recent years. Ignorant People who think they know what this lifestyle is about. For example, one of the biggest ignorance displayed has been support for LEOS. This support for LEOS have opened up our lifestyle to an unprecedented amount of scrutiny by the Federal Government and Mainstream Media.
What do I mean when I say support for LEOS? It’s simple. You have many motorcycle clubs claiming to be traditional clubs; meantime they accept cops as members. This is the biggest farce I’ve ever heard and seen. Traditional Clubs NEVER had cops as members. An example of this  comes to mind with Iron Legacy. Headed up by out bad Iron Order founder Ray Lubeski. Lollipop is a guy who never once prospected for a motorcycle club. He is also a guy that made sure cops were involved in his organization in order to have built in protection. After being thrown out of his old club Iron Order, he started his revenge club and decided to testify in a case that could’ve effected all motorcycle clubs. He did it willingly, without regards to the possibility of the government infringing on the rights of all motorcycle clubs, riding clubs, social clubs.
Here’s the deal. Rubs have started destroying the scene from the inside out. They carry this mindset they are entitled to do what they want. They have no respect for tradition. It was that very tradition which kept people in motorcycle clubs from going out in public and causing all kinds of problems for the scene as a whole. Here’s a news bulletin for all you RUBS and popup up clubs. This isn’t a game! Not everyone is entitled to a trophy you Jack nuts. Put clearly, you’re a bunch of cowards who didn’t want to accomplish shit the right way. You didn’t want to prospect. By contrast, you started up some fly by night bullshit and sell your shit online. You then wonder why your shit clubs fall to pieces within a year.

The Last Chicago Hoax. The Real Story of Big Pete; Out Bad Member of the Outlaws M/C. Snake Oil Salesman unmasked in his own words. Buyer Beware

With the idiots aside and the mature adults in the room who can comprehend what is at stake. The case right now facing the Mongols could reverberate throughout society as a whole. Check out this story from Pasadena Star News. It explains exactly whats going on.

At its heart, the case poses some interesting legal questions, said Rebecca Tushnet, a Georgetown law professor who specializes in trademark and intellectual property law.
“I’ve never heard of anything like this in terms of trademark law,” Tushnet said. “There’s no barrier to the government seeking this kind of remedy, but there are some prohibitions.”
Tushnet said taking the trademark — for example — wouldn’t give the government the right to rip jackets off the backs of Mongols any more than it has the right to rip counterfeit Louis Vuittons from the clutches of random women shopping on Rodeo Drive.
And the point where trademark law overlaps with protections for free speech outlined in the First Amendment is “simply a mess,” Tushnet said.
It is likely the government will argue that the Mongols are a “clear and present danger,” and they will likely conclude that on that basis Mongols members should forfeit their patch.

Yes, this is happening in the United States. Prosecutors Seek to Strip Mongols Motorcycle Club of its Logo. Video Enclosed
“But, it’s hard to imagine that a symbol worn on someone’s back as they are riding down the highway meets that standard,” she said. “What the government is trying to do — if I understand correctly — it’s trying to do a little slight of hand in terms of seizing that trademark.”
Which is exactly what Santillan hopes to prove, and he says he has backing in the cause from traditional rivals who belong to other groups.
“A lot of clubs are taking the same stance and want to band together to fight this thing,” he said. “It’s about everybody that wears a patch from Christian bikers to one-percenters. This is going to be a big thing. There’s a lot of constitutional issues involved in this.”
Former federal agent testifies about his years undercover with the Mongols Motorcycle Club in Gov attempt to strip Mongols of their patch. Video Enclosed
This is extremely scary shit for all American Citizens. One of the biggest quotes that stood out was “I’ve never heard of anything like this in terms of trademark law,” Tushnet said. Essentially, the Government wants to make law and hope it sticks on appeals. Let’s talk about appeals by the way. This case is back on because the 9th Circus Court as many designate it reversed the case being thrown out. Take a look at what the judge said in 2013.
By Frank C. Girardot | Frank.Girardot@sgvn.com |
PUBLISHED: October 26, 2013
Original Stance of the Judge
The key legal requirement for RICO prosecutions involves identifying an individual and an organization. The Government charged, as the person, “Mongol Nation” alleging that it participated in the affairs of the enterprise “the Mongols Gang.” Judge Carter concluded, “There is no meaningful distinction between the association Mongol Nation and the enterprise of the Mongols Gang. The indictment therefore fails.” So at the end of the day there was a failure by the Government to meet the RICO requirement to identify a person and an enterprise.
The judge in this case knew what the government was up too. At the opening of the current trial the judge even said to the jurors that no one is on trial to go to jail. It’s about the government taking the patch of the Mongols. Let that sink in, especially those who support the right of motorcycle clubs to wear what they want.
In my opinion, I think this issue is one everyone needs to take seriously. This goes out to the supporters and people who have no skin in the game. Before you go out slamming on a club you might not like, remember if they loose this case, it will be the club you support next.

Notorious Mongols Motorcycle Club fighting U.S. government to keep its vest patch . How is this even possible in the United States?
For more commentary about what’s happening in the scene, join us on our YouTube channel every morning for a new video. Subscribe and become apart of the Throttle for free. Get involved in the conversation and be involved.