I had a subscriber ask me once, “why do you always talk about what young people missed when you were coming up?” Maybe it comes with pushing 50 years old, but looking back, those were truly the days to be a biker. Things back then were so much simpler, none of this social media and especially no politically correct crap. I often think about some of the things we did back in the 90’s and chuckle. I know damn well some of these newer kids would’ve been shell shocked, on some of the things that went on. I often have to remind myself that I’m in a different time period, when doing motorcycle madhouse morning biker news. Situations were handled a lot different than they are now. It’s actually a bonafide culture shock for me. Personally, with the commercialization of the scene, it’s gotten away from the purity it once was.

I’ve talked to many bikers my age and older. Most of the time it’s always the same type of conversation, “these new kids are missing out.” It’s always nice looking back at the experiences I was able to get. The people I’ve met and the parties I’ve been to last a lifetime, something I can go to when doing the news. Sometimes it’s funny though, people are actually shocked at some of the stuff I say. Maybe this is why many people compare me to a shock jock. It’s funny though, I don’t look at myself as that. I look at it as being real and up front, something many people nowadays are not. Maybe this could be looked at as a complication of what the scene has become. People are just not real as they once were. Personally, I thought it was the best quality a biker could have.

The number one thing I really find disturbing about social media, is all the attention, paid to motorcycle clubs. Sure, they were always talked about, but not like they are today. Maybe it’s because the conversation is just amplified, because of social media. Here’s the thing though. I don’t ever remember it being the topic of conversation, all the time. The biggest topic of conversation back then had to do with the next ride or where to party.

I would have to say this goes out to the new jacks. Don’t let the conversation be dictated on how to join a club. Let your conversation be dictated about where you’re going to ride next or where the next party is. Let the conversation be about banging that nice piece of tail at the rally or going to a strip club with a handful of dollars. That’s the scene, doing what you want to do and maintaining your independence. It sure the hell isn’t sitting there with your pecker in hand, jerking off, about getting information on joining a club. 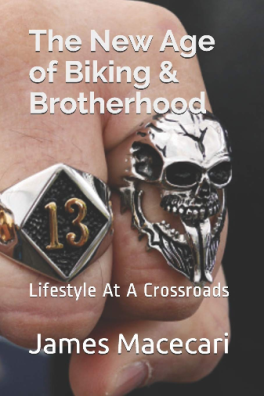 “Wheels Up Guns Down” ride leads to a smattering of arrests, the seizure of dozens of vehicles, as well as a racially charged gun confrontation

I’ve said it before and I’ll say it again. Join ABATE or a riding club if you want to be apart of something. Motorcycle Clubs right now are not the same as they once were. I would go further to say that motorcycle clubs have lost their way. I’m not against them, but I’m sure not going to promote them, especially when most people don’t understand them. The people you meet at ABATE or in a riding club will be people with your same interest without all the hassle of politics.

I was once asked if I regretted joining a club

The short answer is yes, I do regret some of that life. The biggest thing I regret was giving most of my time to the club. I lost a lot of time on other stuff I could’ve pursued, not to mention the money that could’ve been made. Looking back I should have taken my own advice and joined a riding club. The perfect riding club for me would be just about the riding and partying. I wouldn’t want anything to do with the politics of motorcycle clubs, nor would I want to commit my time to it, every minute of the day. That’s what the premise of a riding club in my eyes should be anyways. I do know some that actually try to mimic a motorcycle club, but that just isn’t me. Yeah, I’ve changed over time, especially in some of my views. I’m guilty as charged! When I was younger the club scene was the ultimate rush. I believe this is why I try to give alternatives to a club, choice if you will. The older you get the wiser you get I suppose.

Let all the noise bounce off you

For all those out there that want to experience the scene in its true form, pay no attention to social media. Basically, let all the chatter go in one ear and out the other. The subject that’s debated all the time on social media is “what’s a biker?” Well here is a simple answer for you. Two wheels and the heart to stand for what you believe in, nothing more and nothing less. Fuck all those people who say this and that makes you a real biker. All you need to know if you’re for real is what’s in your heart. I personally could care less if you travel around in an RV or trailer your bike to the next destination. Here’s a question. Do those people questioning your integrity and dedication to the scene pay your bills? If not, who gives a flying fuck what they think. Why? Because you sleep in an RV or trailer your bike. Get the fuck out of here with that shit. You want to know why they say all that shit about RV’s? It’s because they are jealous they don’t have one. I don’t know how many times I heard club guys bitching about having to sleep in tents at rallies. Yeah, club guys wanted those RV’s as well. So don’t let an idiot get under your skin with that crap.

How do I like going to rallies or riding long distances? Well, I pack a two man tent and tarp. I also pack some camping supplies and pull over and set up where I want to. This is my choice of how I like doing things. The choices I make have no bearing on the way you want to do things. To each his/her own to do what they want on their own terms. That’s one of the best things about the lifestyle, doing whatever you fucking feel like doing. This is a mentality which has escaped us in recent years. Instead, people are always worrying about what others think of them. I get email after email from haters on a daily basis, mainly because of the business I’m in. When some of these maggots write their bullshit I laugh. What the hell do I care what they think? The death threats don’t mean shit to me, the bullshit “fuck you, you don’t know what you’re talking about,” don’t mean shit to me. Sure, doing what I do you need a thick skin, but the mentality also has a lot to do with who I am. I just don’t give a fuck what people think of me. This is the mentality that doesn’t only make you a biker, but it makes you a man.

What happened to just riding and partying to when the sun came up?

Well there is a simple answer to this question. The reason is the scene and many of those in it, have become a bunch of freaking gossiping school girls. My god, when I see some of the comments I have to deal with, it truly is culture shock to me. Some of these comments are downright fucked up the way people think. Here’s a homework assignment for you. Go through our YouTube channel comments or Facebook Comments. You will then see what the hell I’m talking about when it comes to some of these people’s thinking. My god, sometimes I feel like I need to jam a pacifier in these people’s mouths. It’s especially funny when I talk about some of the things that used to go on during parties. Some of these people actually flip the hell out like it was the second coming. Those are the people who would’ve got eaten up in the 90’s. What I came up thinking is normal isn’t what it is today, let me tell you.

People need to get back to the basics, they need to see the scene as it was meant to be. The scene wasn’t for the politically correct, it was for those who wanted to do life on their own terms. We didn’t care about what others thought about us, we did what we wanted to and partied the way we wanted. The biggest mistake anyone can make, biker or not, is to care about what others think about you. So what’s your thoughts, where did it all go wrong? Do you think our generation failed the up and comers by not passing on what we’ve learned? Leave your thoughts in the comment section and get the debate started.